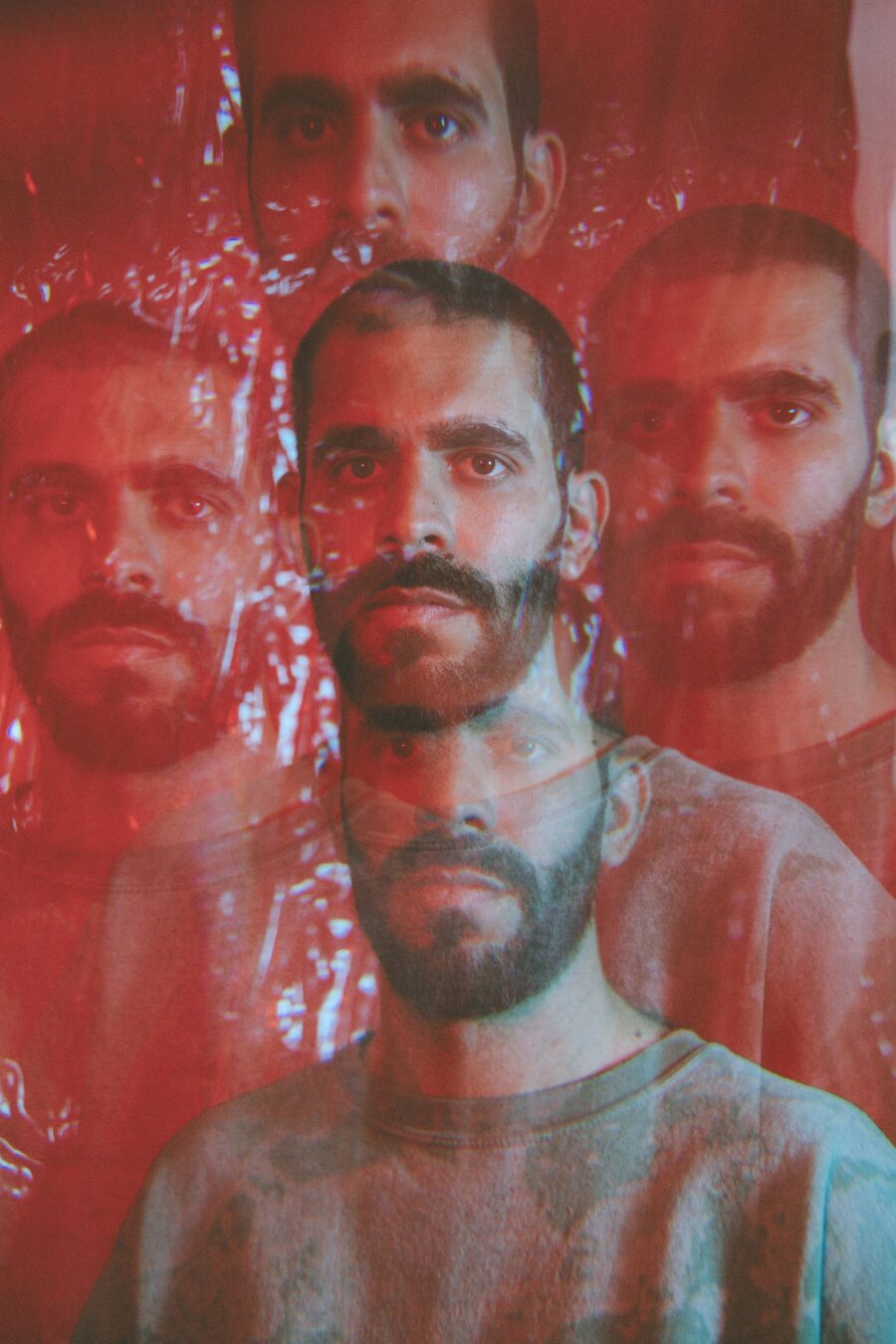 Heading over to Portugal for our latest Lowdown feature with the wonderful Shcuro who has been described as ‘one of those not-so-hidden-anymore treasures from Lisbon’. Releasing his first record in 2012 on the Barcelona label Basal, Shcuro has since gone onto release on the likes of Dark Entries Records, Container Music and most recently Violet’s widely-renowned naive imprint – a label that Shcuro does the artwork for as of his many projects. A very creative jack of all trades, Shcuro also runs the label, party and radio show Paraíso which is more of archival platform, aiming to document the past, present and future of the local rave movement in Portugal in hope to build a stronger community. To tie in with the release of his Echoplexia EP on naive, we caught up with Shcuro to dig a little deeper into his artistic journey so far, the inspiration behind his projects, motivations and influences in both life and art.

Hey João! It’s really great to have you featured on the site. You’re described as “one of those not-so-hidden-anymore treasures from Lisbon”, but how did you first get started? What are some of your earliest memories with music?

Hi! Thanks for having me! I started listening to music at a very young age. My mother used to play music at home all the time. I remember the first song that really stuck with me was The House of the Rising Sun by Animals. Besides that, I was always asking my grandpa to play his Vangelis albums. I loved how intense they were. Influenced by my mother I started playing guitar when I was 9 and kept playing music on different instruments and formats since then!

What were you listening to when you were younger and how does that feed into your music taste now? What has that journey been like?

I was a teenager when the whole Nu Metal thing exploded. Was super into bands like Sepultura, Soulfly, Deftones, Limp Bizkit, Korn, and System Of A Down. Around the same time I started listening to american hip-hop through Wu-Tang Clan, Nas, or EPMD, and was also obsessed with a few bands like Nirvana, Rage Against The Machine, and Radiohead. Apart from that I think it’s worth mentioning I grew up in a small suburb in Lisbon called Linda-a-Velha, where there was a strong local hip-hop scene and where the portuguese hardcore punk movement started. Both were big influences for me. A few years later I discovered dance music through friends via portuguese mix CDs from Kaos, X-Club or Alcântara-Mar and also big groups like The Prodigy, Underworld, The Chemical Brothers or Bomfunk MCs. I noticed there was a common element in some music that drew my attention instantly: Basslines! I was always on the hunt for music with an emphasis on the bass. Finally I discovered one of my musical passions through a King Tubby album: Dub. These different sounds, arrangements and approaches to music really shaped me into what I am today.

As a kid growing up in the 90s, I was always recording songs from radio to tape. Those were my first mixtapes! I tried to learn how to play the guitar and drums but wasn’t good at any of them ? Played in a few bands with friends and even recorded a demo but I was terrible at it and it really showed on that demo tape! Then, at 15, after saving money through a few summer jobs, I got two cheap turntables and a mixer. I realized the money I saved wasn’t enough to buy any records so I started looking for a more permanent job and got one at a record store. Every cent I earned there I spent on records and after a few months I had enough to start playing. I was 16 when I got my first DJ gig in a bar.

Are there any pinpoints in your life when you knew that music / art is something you wanted to pursue?

I went into art school, discovered graphic and web design through my Geometry teacher at 16 and really got into it! Even after my first DJ gigs, I was looking at music as something I’d like to keep doing forever, one way or another, but was skeptical I could make a living out of it. If you’d tell a 17 year old me that people would put my music on records, that I would play records in clubs, run record labels or do radio shows on both an online radio and the national radio I wouldn’t believe you!

You run the label, party and radio show Paraíso which aims to document the past, present and future of the local rave movement in Portugal, what draws you to archiving / documentation in particular?

At my first job in a record store I had the privilege of working alongside some of my idols (DJ Jiggy and Luis Leite) who were, and still are, very passionate about the local scene. They told me many incredible stories which made me realize they were not preserved anywhere and would be lost forever in a few years if nobody archived them somehow. I have never given this much thought but it might have something to do with my father’s interest (more like an obsession) for history.

What do you hope to achieve through Paraíso?

Our motto is to connect the past, present and future of dance music in Portugal. We want to help building a stronger community based local scene. That’s the original spirit of the rave scene.

Is there a specific era or moment that you’ve documented/researched that you wish you were a part of? Do you feel that you belong to this world and time?

There were many key moments in music that I’d love to witness and I find myself romanticizing a lot! On the other hand, we’re living in such a unique time in music now, which is naturally a consequence of the past. That idea drives me and inspires me to keep looking into the future, as I am very curious and romantic, I love to learn from the past, being focused in the present, but always thinking the best is yet to come!

What is the unique aspect of Portugal, or Lisbon’s, music/rave community? What makes it different from other cities in Europe?

Portugal is a small country but there are loads of talented people doing important things for the scene right now. Being a conservative country, it gives me hope to see there are people willing to resist, to fight the status quo, bringing politics into dance music by refusing to be silent about discrimination and prejudice. In the last few years there has been an increase in the number of crews and cultural agents that work hard in trying to change the paradigm and I find that really special!

What’s the story behind your recent EP, Echoplexia?

It’s my most recent take on bass heavy music, using dub mixing techniques and effects. All the tracks are very different and the usage of those effects and techniques is the common element between them. Got to work with my partner Maria Amor on one of the tracks which is something that means a lot to me. Violet and Ilana Bryne made two incredible remixes, completing this 6-track EP. Forever thankful to Violet for asking me to make this EP for her label Naive.

You’ve designed all of the artworks for naive, how did your relationship begin with the label?

Violet is one of my best friends and someone who inspires me a lot. On one of our many conversations, she mentioned the will to start Naive. Not only did I like the name and the concept behind it, but it also resonated heavily with me musically. We’ve been working together for many years now so it seamed only natural for me to work on the visual side of the label. I got to do the artwork for my EP as well, which was fun and helped me materializing my vision for this record.

For me graphic design is the visual side of communication. Like music, it has its own codes, symbols and even languages, and it’s always evolving. I see it as a powerful tool that should be used for the right purposes. Anyone can do it using the tools at their disposable. I believe it combines art and technique and follows one important principle: form follows function. It can be beautiful but above all it must serve its main purpose: to help transmitting a message. As for my process, I would say it’s quite similar to when I’m making music. I’m not attached to any particular style or practice and I look at a new project as an opportunity to experiment and try new things, be it music or design.

Are you more informed by relationships or research?

Both, actually. I value my relationships a lot. We’re all conditioned by our personal experiences, so I try to combine my research with what I learn from people that are close to me. Anyone have something to teach to one another. I believe we can only grow in community.

Do you feel that your environment has had an impact on your art? If so, how? What do you take from your surroundings?

Absolutely! We’re definitely a product of our environment. I moved three times in the last three years and, as my enviornment changed, so did my music! Also, after 16 months of being home 90% of the time, I look at my house and neighboorhood from a different perspective, and realize how priviledged I am for living within such beautiful surroundings and being able to enjoy the soothness of being both in the woods or near a beach a mere 10min walk away.

What are some of your biggest influences? These can be musical or anything outside of it.

This list could easily be super large so I’ll try to keep it brief! Musically, I’d say what influenced me the most was Motor City techno and electro, Chicago jackin house, 90s NY house and hip-hop, The Hague acid, the whole UK hardcore continuum, jamaican dub and, obviously, early portuguese dance music! All these had and still have a direct influence on the music I make and play! Besides music what influences me the most is my partner, my friends and my community, nature in its wildest shapes, brutalist architecture, science fiction, and art in its various disciplines and practices.

Is routine important to you? Do you have any routines in place that help with your creativity / discipline?

I wouldn’t say I have a routine but, before the pandemic, whenever I got uninspired, I would go out to listen to my friends playing and that would restore it! Now, in the Covid-19 era it’s way harder to get inspiration, but I try to keep the creative juices flowing by surrounding myself with nature, either by walking in the woods or to go to the ocean.

What are you working on at the moment?

Writing an EP for a label I truly love, a few remixes, and an exciting collaboration with Dexter for a special project! Besides these, working with my partner Maria Amor on the next releases for Paraíso/Rave Tuga, including EPs by Morrice, an EP from Vil, Diogo, Model 9000, Yen Sung & Photonz, including remixes from Violet, EDND, Ecstasya, DJ Satélite and Moreno Ácido.

Working on exciting projects with people I truly admire hoping we’ll get through this pandemic stronger as a community!

‘Echoplexia’ by Shcuro is out now via naive – buy here.