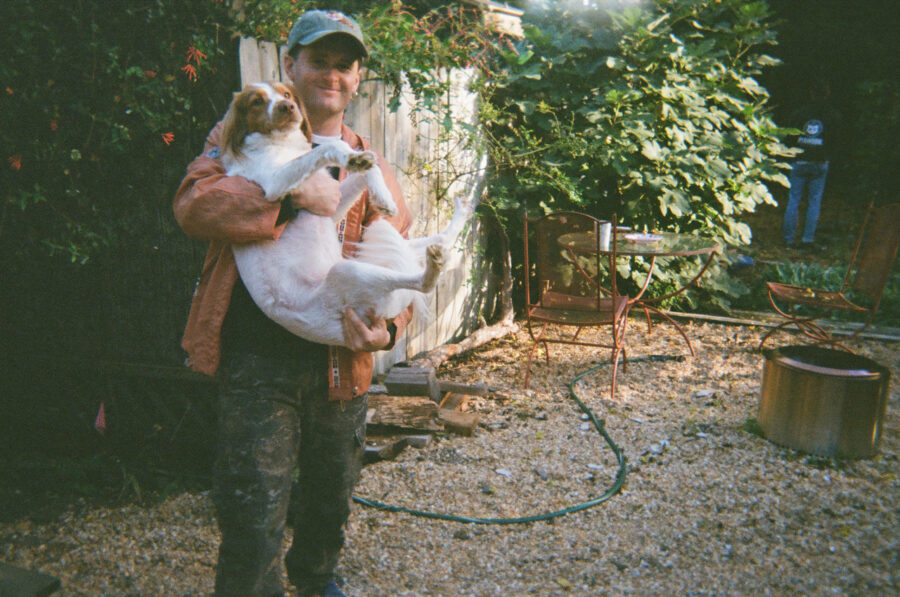 Love Letters is part of the expansive world that Maxime Robillard orbits in. An alias for his house and music productions, Maxime is also a self-taught engineer and mixer, releases ambient and experimental music under his given name and as Hypnotic Spa as well as composes original works for film. Originally from Vermont, Maxime moved to NYC in 2012, becoming part of the Nowadays family and releasing on labels such as Mister Saturday Night and most recently Physical Therapy’s Allergy Season. Sharing stories is deeply ingrained in everything Maxime does – from his work as a composer to Love Letters where he is self-releasing collections of work on Bandcamp in order to ‘fill out missing parts of my story’.

For our latest Lowdown feature, we get to know more about Maxime’s artistic journey so far from the environments he has lived in, approach to production, the ‘Projecting’ EP on Allergy Season and more.

Hey Maxime, how are you doing and what have you been up to lately?

Late this summer, I moved the studio space my friends and I share, and setting that back up has taken quite some time, but just in the last few weeks it finally got to the point where we could get back to making music there. It’s a bit bigger and better organized now. That has been great, as I had taken a break from making music since July. I’ve been good for the most part, but while resetting my mind and ear, and helping re-focus what I want to be working on, it has also been hard taking such a long break from making music. It’s how I work through emotions, and it’s such a part of who I am that without it I feel like part of me is missing.

Originally from Vermont, how do you feel the state’s natural landscape helped shape your creativity?

So much so honestly. The rise and fall of the mountain range, the density of the forest, the shockingly green springtime, the crawfish living in tiny forest streams, hanging out in trees with my headphones, the natural beauty that just exists as-is, that you feel you don’t need to ask anything more of it or make anything more to add to the world… It has all informed me aesthetically I think, as well as philosophically, which is why I do like to keep it mentioned in my bio because it is still relevant and important to what I make and who I am.

Now being based in New York, what does the city mean to you? How has it helped you both as a person and artist?

My first release on Help Recordings was a response to being in the city. I wanted something noisy, something with thick atmosphere in the sound, so if you were listening to it and it was interrupted by trains, cars, yelling or anything, it wouldn’t mar the experience. The music is already dense and noisey , ‘lo-fi’, so the exterior sounds are welcomed to mingle. That’s what was on my mind when making that record in 2012-2013. Since then the wealth and richness of music here, of the fresh energy, the old heads, the stories, the way the past is celebrated and carried on while simultaneously it’s all new-now-next, all those have influenced me and taught me. I’m sure there are things or ways I’ve changed in response to living in a city that I’m not yet aware of.

As a self taught engineer and mixer how did you first find your way into these two roles? What was it that first caught your interest?

Something about the magical excitement of recording your self, layering takes, recording with friends and then our work/experience becoming a single thing, together, hooked me as soon as I first started using Garageband with a telephone headset microphone and a 2-channel m-box interface. My half brother, also a musician, was visiting during the holidays, and  he suggested we record a cover of Space Oddity. Once that began it just never stopped. I had taken a break from piano lessons at that time so I enjoyed recording as a vehicle to get me back into music, giving reason to practicing an instrument for me, and begin to learn new instruments. As I learned more about recording, mic placement, and mixing, I started to have opinions and develop taste in how things sounded. I began to listen to music for its production value, not just the style or lyrics or something. It was largely a struggle at that point to get what was in my head into the mix! But starting to unravel the mysteries of how sound becomes a recording was fascinating to me, still is, especially the way you can craft another world that each recording can live in, or be a world the listener is brought.

Your bio says that you are musically trained from a young age – in what form did this take? Were you brought up in a creative household?

I started piano around 5, continued with a brief break, through junior year of college, and I began percussion in elementary school band and took lessons at school til16. My father plays saxophone daily still, and is currently arranging and helping lead a local band in Vermont, and my mother, while not musical, is a very creative person who worked as a summer camp director for years, and who taught us the value of making things ourselves and making do with what you have.

A jack of all trades, you also work on film scores – what is your approach to these vs putting together EPs for labels like Mister Saturday Night and Allergy Season?

Oh so completely different. I have to spend a lot of time absorbing the influences and point of view of the filmmaker, to try and inhabit the world they’ve created. From there I work as I often do on my own work to start – seeing what gets me excited when looking for a certain sound, and then just jamming. I find it very helpful to have the visual playback going while I play around. Usually I start by sending snippets of many ideas, that gets whittled down, and what remains starts to be fleshed out for the final soundtrack. For an EP, I just have to keep surprising and delighting myself in the studio, and after time see if any things can be grouped together.

I imagine there’s an element of storytelling within both, but how much of your Love Letters productions are inspired by fantasy rather than reality?

Oh I think it’s all reality. I fantasize about moments of reality, and that condenses into a track. Often the tracks are the edits of moments or feelings I’ve experienced.

Earlier this year you released ‘Projecting’ on Allergy Season, what is the story behind these tracks? What do they represent?

Those were all really pushing myself to use “uncomfortable” sounds: things I’d usually shy away from. They were also exercises in speed and melting away inhibitions. I truly never imagined With Stallions being released, that it would be a bit of a personal novelty. Something about it still feels so right, so “me” in it’s use of piano, honky tonk style, humor, and deep sub kick… it’s a self-portrait really, but only did I realize that after sitting with it for a few weeks.

What is your favourite part of the process when pulling together an EP?

Hearing the red thread drawn through tracks that weren’t necessarily planned together. The pieces come together and suddenly I hear something of myself I wasn’t aware of before.

What does your production process typically look like? Is there an idea in mind before you go to the studio or do you work with a lot of improv?

It’s always an idea before starting. I design the set, I think of the characters, I paint the backdrops, and wonder about their motivation. I think of the track’s purpose, the space for it to inhabit and speak to, and then I improv and find the pieces to flesh out the idea. The idea could also be “I’m going to just focus on the 606 for a while and pipe it through effects and hear what happens.” I’ve gone from, years ago, piecing loop-by-loop, spending months on a track trying to hear within it, hear what it wants to go, to trying to get it all together and sequence and improvise a 10-30 minute live take that is then edited down. If I can’t get it 75% together in a day I usually don’t go back to it, unless it’s a crystal clear vision in my mind that I can hold onto, revisit. I’m mostly tracking into ProTools, sequencing some things on an Octatrack, and jamming live with other parts.

How did your relationship with Physical Therapy and Allergy Season first come about?

Daniel [Physical Therapy] had just moved back from Berlin and needed to test out a test pressing. We had recently met, he hit me up and came over to play it on my deck at home. I made him a lunch of macaroni salad and bread with anchovies and I guess that worked?

You also worked on the Car Culture LP, what is your approach to collaborations? What do you enjoy about them?

I love working with people I admire! I get to try and play to their strengths, to ask of them their input in areas I admire of them and watch where they take it, and learn from them. Alternatively, I get to play around with someone and watch them express a whole different side to themself. Both approaches I love. It’s getting a chance to watch someone whose work I’m familiar with exercise their passion, and to build something together that may never have existed if we had stayed on our own. That is especially exciting, when 1 person +1 person = a 3 thing.

When do you feel you are most inspired?

In a variety of spaces and states of mind. When I can relax, often with a view, in particularly with nature (where I’m more fluid brainstorming), and I can hear my mind more clearly. There is a state of nature. Alternatively, when I’m out dancing in the right kind of party, the right kind of music and space, and with people with whom I am able to connect with at a deep level (friends or sometimes not). There is a state of mind.

And what has inspired you recently?

Pent up energy and misfirings.

How would you describe your artistic journey so far?

I was looking through a window into a room, I found my way in through a side door, got lost in the hallway, found the room, and now I’m gazing out the window and have yet to realize that I want to figure out how to open it.

Can you tell us about a record that had a massive impact on you?

Tom Jones – Live in Las Vegas. Specifically his hit “It’s Not Unusual” that is on that record. Found that when I was 8 or 9 and fell in love with records and turntables, started making tapes from the radio and old records of my parents that I found in our barn, and in a way never really stopped…

What has been a lesson you learned recently?

Resting the meat after cooking it may not be as essential as popularly thought!

What are you looking forward to next?

‘Projecting’ by Love Letters is out now via Allergy Season – buy here.