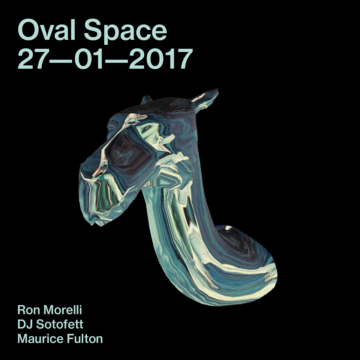 Over the last few years Oval Space has managed to cement itself as one of the premier nightspots in London, primarily through its consistently stellar bookings. As well as 909 favourites such as Ryan Elliott and Nick Höppner, the club has enlisted the talents of techno royalty Robert Hood and has just announced that Detroit supervillain DJ Stingray will be throwing down some heat later this year.

The club and its little sister Pickle Factory also deserve praise for their 2017 residents, which include the Berlin based murker Dr. Rubinstein, the bad boy of the Pacific Rim DJ Nobu, perennial favourite Jane Fitz and the OG himself Mr. Fred P. This team sheet of selectors oozes class and reflects a varied and imaginative booking policy. It makes no compromises in quality nor appeases the growing popularity and subsequent dilution of electronic music. The equal gender representation should also be noted, which has been the elephant in the room of dance music for quite some time.

So, for our most recent knees up the 909 crew descended to the hallowed ground deep in the depths of Bethnal Green to hear some voodoo sorcery from three of the baddest motherfuckers in the game.

First up was the tsar of L.I.E.S. Records, Ron Morelli. A record label synonymous with analogue wizardry and enigmatically futurist electronix, it has seen producers such as Delroy Edwards, Voiski and Steve Moore go stratospheric in recent years (Voiski’s ‘Wax Fashion’ is a particular fave).

Morelli is best suited to deploying his vast array of imperialistic WMDs, but on this night was put on warm up duties and handed an appealing three and a half hour set. Although it was clearly not a slot he was used to, Morelli demonstrated impressive restraint and treated the crowd to a tasteful journey through italo, house and some predictably jagged chuggers.

Up next was DJ Sotofett, the Sex Tags Mania boss and part time dragon-slayer from Norway. He is without a doubt one of the most elusive and highly respected selectors in the game, and boasts a superior back catalogue of percussive oddities. It was him who we had mainly come to see, and we were eager to see what dark magic he would conjure up, having been handed an effectively blank slate to start off from after Morelli’s measured set.

However, instead of picking up where Morelli left off, Sotofett chose to swagger in and play the most ostentatiously aggressive techno this side of the galaxy. Saying a big ‘fuck you’ and setting fire to the textbook that insists that DJs sustain the vibe curated by the opener, he ramped the energy up to alarming levels and dragged the crowd through a 2 ½ hour journey of techno so titanic that it could have given Zeus a black eye. It was laughably punishing, and successfully avoided the homogeneity that plagues too many techno sets.

The night promised eclecticism and weirdness, and Sotofett’s audacity felt perfect for it. This wasn’t a night for traditional house and techno, and his set was a statement of his impressive confidence to play what he was feeling, as well as his sadistic willingness to make some noses bleed.

Maurice Fulton completed the line-up, and managed to keep up with Sotofett’s selections without betraying his house roots. His selections were more enriched with melody, and kept the crowd marching until the very end. However, his set did little more than to serve as a coda to Sotofett’s zany unload of dystopian ammunition.

Overall, the night was a very satisfying homage to eclecticism and was an affirmation that uncouth selections and an iconoclastic approach toward nightlife is pivotal for a healthy and vibrant scene.