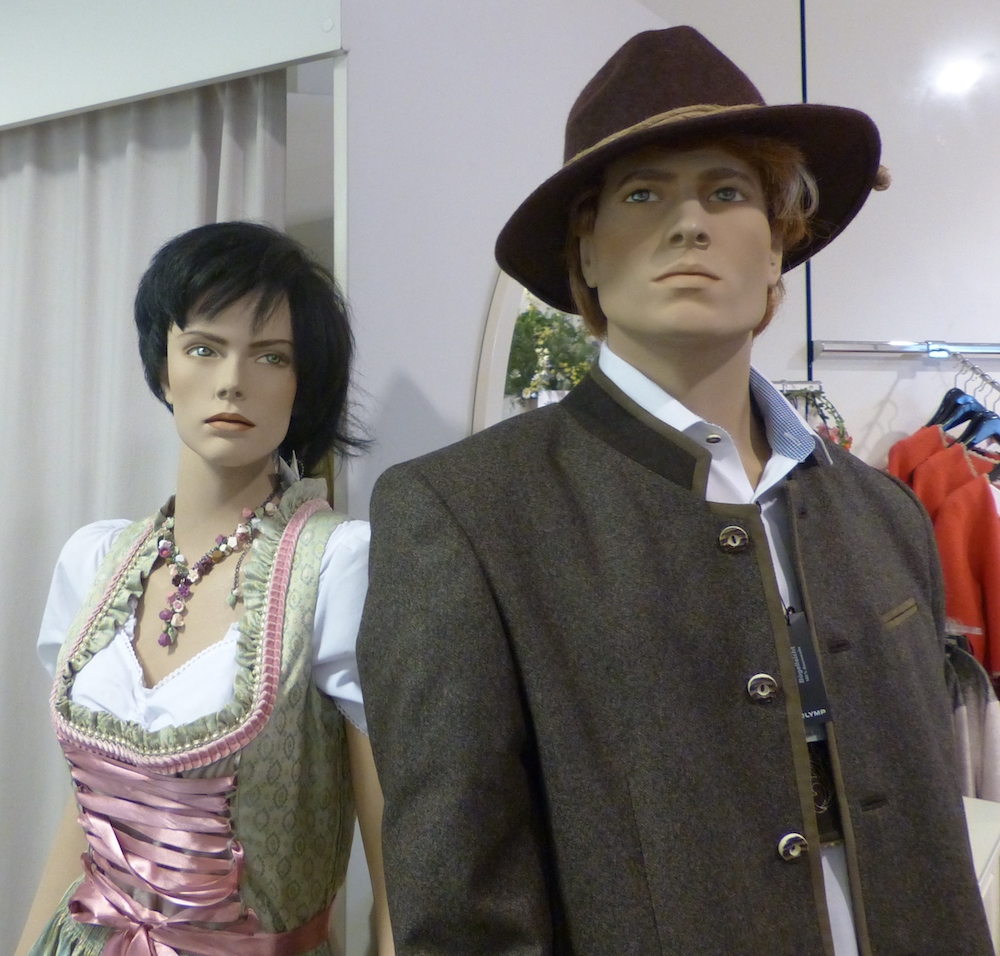 There’s an intriguing, mysterious allure around the project Fred und Luna. The brainchild of Rainer Buchmüller, the concept revolves around two mannequins living in a fashion boutique in Karlsruhe, Germany. Represented by Sugar Ray Buckmiller as Fred in the live shows, Luna is an ever-changing musician often chosen one day before or on the day of the show. The obscurity runs throughout the productions as Buchmüller releases his own coined genres Elektrokraut/Krautelektro. Having previously released on Optimo Music with ‘Glück auf’ EP and Bigamo Musik with their first album ‘Im Klanggarten’, Fred und Luna now make their debut on Compost Records with their second long player ‘Im Tiefenrausch’. Following the release of their first EP and LP, Fred und Luna toured across Europe with sell out shows in Germany, France and England.

With ‘Im Tiefenrausch’ released earlier this month, we catch up with Buchmüller to discuss the concept behind Fred und Luna and the live shows, the story behind some of the album tracks and the meaning of Nadaphysique.

Can you explain the concept behind Fred Und Luna and the decision to base it around two mannequins?

The “Fred und Luna” concept came up with the idea of doing a homage to repetitive and melodic German electronic music, which has made a strong impression on me since my teenage years. The release switch for my love for mannequins and to use them as an avatar for the mentioned project was “Kraftwerk’s” song “Schaufensterpuppen”. Around the time when the German wall fell down, I lived in Berlin working in the “DHM” (“Deutsches Historisches Museum”) located in the former Eastern part of the city. My job was to dispose – means to destroy all the museum’s mannequins left from the time of the German Democratic Republic. It was a horrible task but I was luckily allowed to save two. A male and a female. The beginning of the story of Fred und Luna…

Having been involved with music for most of your life, why did you finally decide to release your first record at 55?

In retrospective, it was my decision to wait such a long time. Since the mid-80s I periodically sent tapes and later audio files to labels, but either met with a refusal or didn’t receive an answer. I did not have the guts to create a label and distribution concept on my own. Then, in 2015, believe it or not, the day after I finally decided to release everything on my own I got a message from Keith McIvor of Optimo Music, telling he would love to release a Fred und Luna record.

What have been some of the most prominent influences on your music?

The first big influence to start doing own songs were The Cleaners from Venus, who, back in the early 80s, recorded their releases on a 4-track tape recorder. I loved the homeliness and artlessness of the sound and the songs so much, that I decided to immediately buy a Tascam Porta One and do my first musical pieces with it. Erik Satie, his charming, both sentimental and humorous music has always, up to the present, made a strong impression on me, next to Brian Eno and German Electronic music represented by Cluster, Harmonia and Kraftwerk. And, in a less electronic context, I very much love Can and The Fall.

When you perform live you often enlist outside musicians to perform with you as Luna, how do you go about choosing these musicians to join you? How does this add to the dynamic of the show?

When choosing Luna, I mostly wait until the day of the show or the day before to ask the local organizer or other bands playing the same night or friends living in the city for one or more musicians or non-musicians they could imagine to go on stage with me. In one case Luna was the street musician FX Schroeder. I met him right before the show when he was playing outside the venue in a park in Hamburg. I asked if he would like to join me and he immediately agreed. The idea of the concept is to make each concert a unique event and to surprise the audience and myself. You never know where the journey is going.

What is your dream environment to play a live show in?

Actually, there are quite a few alluring places. If I had three environment wishes, they could be: Playing on a Karl Lagerfeld fashion show. Also in Paul McCartney’s living room or garden. And third: in a Buddhist monastery somewhere in Asia.

Your second album ‘Im Tiefenrausch’ includes some very interesting track titles, can you talk through some of the stories behind them and how they relate to the music?

„Craig Manga und Mat Handley im Gespräch“ is dedicated to two music explorers and radio DJs on Sine FM, Doncaster/England, with a great and diverse taste who are strongly supporting music of not so well known bands and musicians. The use of strange sounds symbolizes their love for unusual music.

“Blues im Gepäck” was written for Norbert Schwefel, a musician from Mannheim/Germany, who, to describe it in a metaphoric way, will stay in my memory as the man who, when leaving us, took the tramway into the ocean with the Blues in his suitcase. This song uses the rays that a blues song is sending out ‒ the mood of feeling blue.

“Nichtmusikalische Stadt unter Schritten” describes the feelings I had when living in Berlin in the late 1990s. I was in a bad mood those days and accused the city to be the offender and to be non-musical, which turned out to be wrong and led, as kinda excuse for my misinterpretation, to a song with a very warm, groovy and inviting atmosphere.

“Dolcefarniente” is envisioning the idea of taking a rest from our fast-paced society, the idea of doing nothing, which many people would mistakenly describe as counterproductive. I chose the title as a dedication to the Italian people, who are often implicated with this attitude to life ‒ symbolized by the plunking and tinkling of the ivories on the piano.

Around the project you’ve created a philosophy called ‘Nadaphysique’, how does the music relate to this concept and if you had to relate it to a real-life scenario what would it be?

As a “Nadaphysicist” I am very much interested in things that are not there or seem to not be there. Things that are overlooked, not recognized or ignored. Things that are not usual and tending towards nothingness. The basic idea of “Nadaphysique” is to think and act different in a world of coordination, heteronomy and superficiality, that is polishing everything. In a musical context, this, for instance, could mean not to overproduce songs, not to smooth and not to correct them too much. To avoid this I try to reduce the time I spend on the writing and recording process towards zero. In a real-life scenario, spending more than 2 or 3 hours on a song is taking out the natural charm of a piece. Most tracks of a song I record in one shot. As modern recording technology allows us to compose a song in a very short time period, I am playing with the idea to write a song in zero seconds or less.

What makes Compost Records the perfect home for this album?

Michael Reinboth and the people at Compost have loved the songs from the beginning, with heart and soul. They are in business for 25 years, have a lot of experience and, which is most important, they have never lost the openness and enthusiasm you need to discover and help new musical acts on their way to the public. I felt like home from the very start. Michael has always respected my lunacy and gave me total freedom. Compost is a label that is rooted in trip-hop and downtempo, with a jazzy influence, but over the years has never stopped adding new sounding electronic and non-electronic acts. The songs of “Im Tiefenrausch” are cast on the same mould, a mixture of old school and modern sounds and beats.

What is your production process for when you’re creating an album? Do you usually have a story in mind that you’re hoping to tell through the music before recording or is it a collection of improvised studio sessions?

For many years I’m a big fan of Oulipo, a group of French writers that create works by tightening rules. Quite a few of my songs are composed in this tradition. So it’s mostly not a story I have in mind beforehand, but a restriction I’m imposing myself. Restriction generates creativity. Imagine composing, recording and mixing a song in exactly 4 minutes and 33 seconds. Or dedicating a song to a special person, in this case, a homage to my mother Edeltraud, which contained the chord progression and the main melody following the letters in her name that can be found in the western tonal system: e-d-e-a-d. But there are also a lot of songs that come to life by just noodling around and tinkling on the keyboard. Most of the time an idea for a story comes up while playing and goes on a journey.

Coining your own genres ‘Elektrokraut/Krautelektro’, how would you describe them and are there any other artists releasing music that could relate to these genres?

After a Krautrock influenced song is finished, I do a short rating. If the music is mainly old school Kraut with some modern sounding accents, I call it “Elektrokraut”. If the song is basically a modern electronic piece with some krautish spots, it’s “Krautelektro”.

The past years, even decades, a lot of bands have integrated Kraut in their music. Stereolab, Cavern of Anti-Matter, Caribou, Camera, Klaus Johann Grobe to name but a few. If they relate to previously mentioned genres? I don’t know and I don’t want to offend or insult any musical colleague. For me, the terms have always been a description of my own outputs.

Over the years you’ve covered so many creative formats such as poetry, painting, photo/video making and of course music, do you approach each format differently? What inspires them?

The approach in all categories is the same. I use a different moniker for each format, that’s the only difference. No matter, if I compose a poem, a photo, a painting or a musical piece, I am inspired by the idea of “La Nadaphysique”. So, as to be seen on the cover and the inside of both Fred und Luna albums, Ariston Baton, the writing identity, is doing very short and minimal poems and supershort stories. Vizudaru Nono, the photo/video maker, and Nikto Nietschinski, the painter, are showing unusual perspectives and views that are overseen or neglected – views that exist and do not exist simultaneously.

What are some of the most important life lessons you’ve learned?

It is very important to know, that we know nothing, that we are not the best invention on the earth and in the universe, that nobody can choose the place they are born into. The search for nothingness and hidden things keeps my mind open, encourages me to always look for new friendly perspectives and humorous, less serious things, especially in times when so many people are clinging to unfriendly, nationalistic, egoistic and narrow-minded theories. To quote Frank Zappa: “I think it’s really tragic when people get serious about stuff. It’s such an absurdity to take anything really seriously … I make an honest attempt not to take anything seriously.”