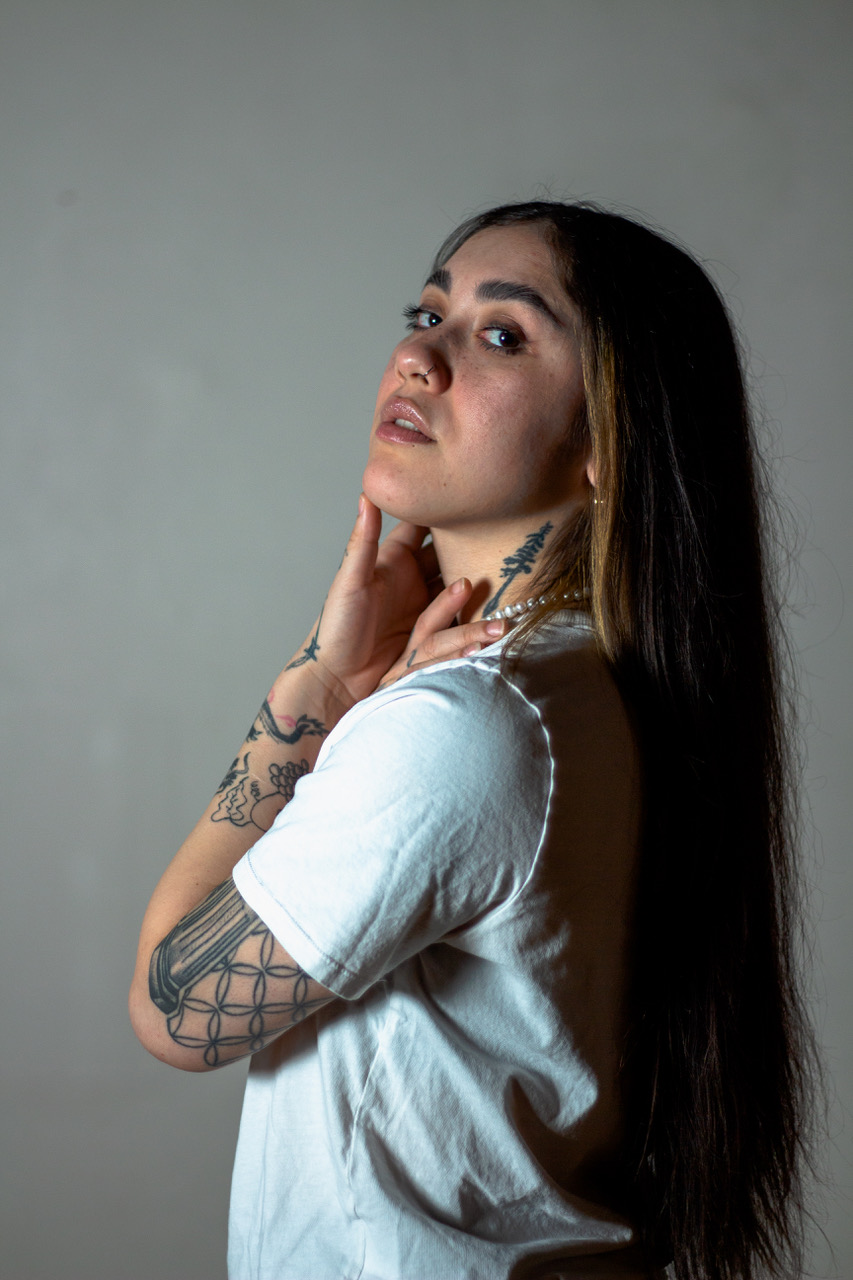 An artist very much on the rise, Mexican producer Ultima Esuna is quickly becoming known for her dreamy, atmospheric productions, often seeped in emotion which span across dembow, reggaeton and techno. Currently based in Vancouver, Ultima Esuna has three records on her Bandcamp page, with the first being released in December 2020. Her style is drawn from her Latin American heritage and is focused more on blissed out, slow melodies which also invite you to dance. The rhythm and passion that exudes her soundscapes is easy to latch onto – earlier this year she had contributed a track to Nervous Horizon’s 4th compilation after being contacted by TSVI on Instagram following a discovery of her track ‘Laurel’ and there’s plans in the works to release a full solo EP on the label later too. Getting to know more about the spirit and motivation behind the artist, we chat to Ultima Esuna about her creativity, the move from Mexico City to Vancouver and how each city feeds her, and what else she has coming up in the pipeline.

Originally from Mexico, when do you move to Vancouver and why?

I moved in 2017 and I did it because I wanted to try new things, travel, and force myself to learn a new language. I never imagined I was going to stay permanently!

How do you think both Mexico and Vancouver have influenced you both as a person and an artist? What have you learned from both of these places?

When I came to Vancouver, it was actually a very difficult period in my life. I arrived illegally and did not speak any English. When I finally started having gigs in discos, people didn’t understand me mixing reggaeton and at some point, they didn’t like my music. But honestly, I think that’s what will always happen if you don’t find your niche, your musical home.

It was recently in 2021 that I found my people and also Nervous Horizon gave me great space and understood my music.

Like everyone, the rave scene is always sticking with you, if you like the music you definitely go to parties and there you listen to all kinds of hybrid music. From Veracruz, I moved to Mexico City in 2015 and that’s when I first came across the underground scene.

What would you say has been the most impactful record you’ve ever come across and had really helped inform your sound + style?

Definitely Final Fantasy VII PC OST 1998. It helped a lot in differentiating between so many different instruments and sometimes we forget that there are more than the common ones. I like to use violins and alter them, or requintos and create a very enthusiastic melody, trumpets, or just record the sounds of the drops from the rain that night. Also DJ Python “Dulce Compañia” and People Plus – “Olympus Mons” released on Incienso Records. I am just trying to do reggaeton with uncommon instruments and making like you are always in a feeling of extreme relaxation but at the same, you can dance around it.

Are there any blogs or platforms that you follow for new music discoveries? What’s your favourite way of digging for new music?

I have a lot of dynamics in digging I think. I am a person who likes listening to her friends! So I always try to dig into my friend’s Soundcloud or Bandcamp. That lead me to friends of my friends and it’s just like that! There is a huge movement in Mexico right now by the way. “MoveLike” is a label founded by my friend 10010 (Daniel Ceballos) he has been doing this Jungle/Footwork/Future Bass movement since before I started producing, and he has been one of my huge inspirations in music. So dedicated to his work, and very culturally mature following trends and never changing his sounds at the same time.

Where do you source your inspiration from? Who/what are your main influences?

My friends are my total inspiration. Norman Maldonado (NRMN/OCTOPTIC) is one of my favourite producers, I still can’t believe he is not a huge star by now!. Bryan (El Irreal Veintiuno), Loris from Mexico, Ranma Entero, Michael Red (Vancouver), SIM (Montreal), Daniel (ISLA RECORDS), all the Vancouver/Mexico scene mostly are something out of this world. Just people who are in the music community and we all do this with a passion and that passion leads us to do great things as a team.

Have you always been creative?

That’s an interesting question. I actually don’t. And I still don’t think I am creative in the present. I have a passion for art, I understand it, and I create it for sure. But I do everything by logic. I started with music at 10 years old maybe, playing the saxophone, and I wasn’t good at jamming, but I was good at reading and memorizing partiture. So I guess with electronic music, I am fascinated by this technical side, that instead of composing I try to apply a bunch of technical techniques? Haha, I just find it fascinating how electricity can manage to do sound vibrations.

I am actually not interested in pursuing music or being a famous artist, my goal is more to build circuits, have my own studio, and live a chill life.

What was it that drew you to music production as a creative output?

I always felt like I’m thinking numbers all the time, does that makes sense? Haha. In my head, there is a bunch of thinking happening and mostly is just a spiral of impulses. People who know me know I “suffer” from hyperactivity. So making music helped me a lot releasing a lot of those impulses and making the sounds.

What does producing allow you to do? What is its purpose?

Knowing and connecting with amazing and talented people and travelling. I guess the purpose is the happiness I feel connecting with people who think like me and who get excited by just listening to music.

What do you hope to achieve through your music? Is there a particular narrative/story you are trying to tell?

I’m just trying to heal myself and let my music talk by itself about all I have been through. There is a particular narrative, but I will be more open about it another day.

What’s your mood when you write? Are your productions often driven by emotion?

Of course, they are driven by emotions! I actually have the problem that I produce mostly soundtracks, and I need to be aware that for selling them I need to Alter them to be played for the electronic music community. The majority of my creations started with a dream, an emotion, being heartbroken, happy, or even hungry.

You’ve recently contributed a track to the fourth volume of Nervous Horizon’s compilation series – how did that relationship come about?

Guglielmo (TSVI) contacted me on Instagram. He liked my track “Laurel”, so he asked me to do an EP for NH (which I am still in process), then time passed by and he wrote again for the compilation and I had already done a few songs. So he chooses “7 salidas”. Thanks, Tommy and Gugli : )

What’s the story behind your single ‘7 Salidas’? Why did you choose this track for the NH compilation?

It is a special song for me. I remember the day I was producing it. It was mid-April 2021, and I was starting to think more about the “ways of doing things right”, so in my head, I put myself seven choices, haha, and I was so stressed for overthinking so many situations and consequences. I felt angry and hope tho. Also, I didn’t choose the song, Gugli liked this one from several songs I sent. This definitely goes perfect with the NH style.

What’s your favourite track on the release?

I don’t have a favourite. All of the artists did such a magnifique job. I am so grateful to be around them.

What are you currently working on?

I finished an Ep called “Entre Tu y Mil Mares” in English it means “Between you and one thousand seas” and it will be my first vinyl release, next to a fantastic music video my friend Aidan Mcmahon directed and I will be releasing some amazing merch that I and my friends Aisyah Q (Vancouver) and Thane (Montreal) are working on together. Working on my EP with Nervous Horizon as well, a remix with Obeka, compilations with Dengue Dengue Dengue, vinyl for the label ISLA (NAP) with the collab with Michael Red from Vancouver, among other many amazing collabs! I am so grateful to be working with so many talented people and now close friends.