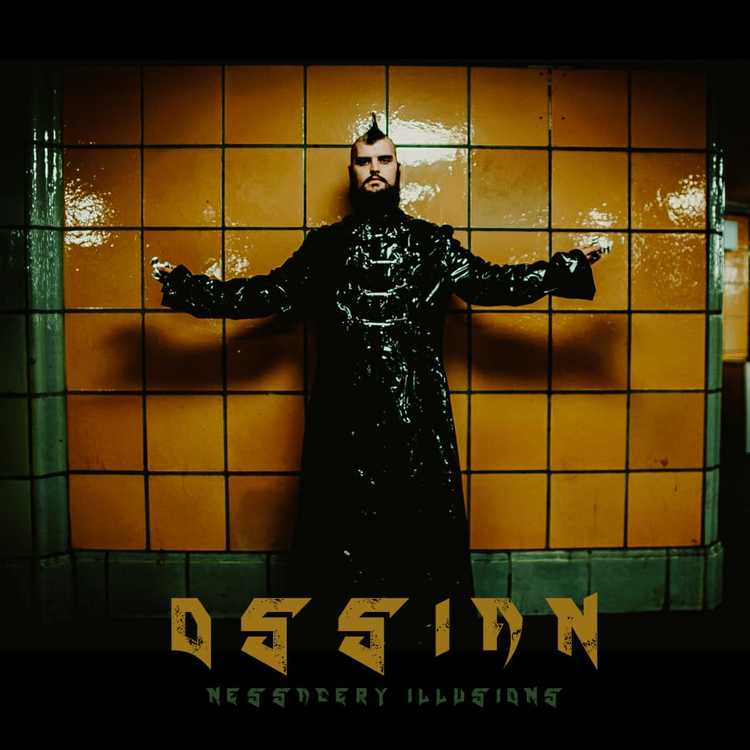 After founding South London Analogue Material (S.L.A.M) three years ago alongside Ansome, Ossian was brought to our attention as a producer with his collaborative ‘SLAM005’ EP in May last year. Starting 2018 off right, Ossian has revealed his debut solo EP ‘Necessary Illusions’ to be released on the 19th January. In the short time the label has been running they’ve released the likes of Keepsakes, ABSL, Gaja and Myler and hosted showcases across Europe with their next taking place at Radion, Amsterdam. We caught up with Ossian to find out why it took him so long to release his first solo EP, the process behind his productions and how he found electronic music.

We’re huge fans of South London Analogue Material so it’s really exciting to hear your debut solo EP. Why did it take so long for you to release solo work on the label?

Thank-you! The tracks have been finished for a long time but we have had some issues with distribution which has caused really big delays. As for the order of releases I didn’t have any music ready to release when the label was started, I think at that point I had been making music for about 6 months. We had ideas for people we wanted to release so I continued to develop my sound until I was happy enough with some tracks.

How did your relationship with Ansome begin and what inspired you both to start the label?

I was away skiing in France and decided that I wanted to learn to make music dance music, I had no experience with music production and I couldn’t play an instrument so I decided I should go to university which is where I met Ansome studying sound design. He is the one introduced me to techno, at that time he was building his live set and the S.L.A.M project was his idea to release the music he was making. We lived near each other in Brixton and after uni we would jam on his gear, it became apparent that our taste in techno and ideas for running a label were closely aligned so I got involved and it grew from there.

How would you describe the sound of S.L.A.M?

That’s a hard question to answer. If you listen through the discography the releases share certain similarities, most of them are noisy distorted bangers but they are also very different and unique to the artist in their own way. We don’t really have a certain sound, we know we are looking for we just listen to the tunes and if we both agree that the tunes are wicked and we are into them then we will release it. It’s important to always be open to new sounds and ideas and I’m sure that as we grow our ‘sound’ will continually evolve.

‘Necessary Illusions’ is out on the 19th January, talk us through the EP and what inspired the tracks?

I had a few basic ideas for the EP; I knew I wanted a couple of 4/4 tracks and something broken beat to mix it up and I knew I wanted to make tunes that were powerful and worked on the dancefloor but other than that it was a completely blank slate each time I started a track. I couldn’t tell you anything in particular that inspired me to make what I did. In general I take inspiration from all aspects of life and i process them into music in a way I’m not sure I understand.

Each track is incredibly powerful with hard and noisy synths, what draws you to this industrial sound?

It has a rough character and a raw energy that I like. I didn’t grow up listening to industrial music so that influence probably comes from rock, nu-metal etc, stuff that has a distorted trashy feel. I think that sound is really powerful when combined with techno, it hits some kind of sweet spot for me.

The title track remix from UVB is the first time he has released on the label – how did the remix come about? Why did you choose UVB to remix on your first EP?

UVB is a wicked producer and a friend of ours so he is a great addition to the SLAM crew. We wanted to get him involved for a while and this was the first opportunity that came up. The remix is fire, couldn’t be happier, finishes off the EP perfectly.

Is it important for you to produce tracks that work on the dance floor? Is this something that you think about during the creative process?

I would say that every track I have made so far has been made with the intention to be played in a club. Doesn’t matter if its a noise track used as an intro or a breakdown, or a straight 4/4 tool I only make tracks I would use when I play out. Being able to feel the music through your body on a good sound system gives you the whole experience so it’s important for me that my tracks work well in that space regardless of whatever genre it might be classified as.

Describe process behind your productions? Do you tend to go into the studio with a plan in mind or do you prefer to improvise?

Making music is an extremely experimental process for me, to the point where I feel like it is an unconscious action. I usually have an idea of the type of energy I want a track to have but once the sounds come into play it becomes its own thing and it will always be different than my original intention. Typically I will jam on a synth or drum machine and then go through the recordings at a later date and start putting stuff together. A lot of the time the recordings are trash but I’ll find something that sounds cool and start playing with it until I have something I like. I get the same feeling when I am arranging tracks, I feel that sense of being in a flow state where I don’t have any thoughts and the music makes itself.

Do you have the same approach to your DJ sets?

I make a new playlist for every gig with a pretty wide selection of music so that my track selection is never the same, but will play tracks that I know work well together throughout the set. So I would say they are mixture of things that I know work well and improvisation. I have recently starting using more CDJs which has made a big difference, I’m always look for ways to improve my sets and bring something new both in the music I select and in the way i mix.

Do you often going clubbing? How does that inform what you make?

I don’t go clubbing loads mainly because the line ups in Berlin aren’t very good, but if friends are playing or it’s a wicked night then I’m always keen. Clubbing is how I got into electronic music so I always love it when I do go. It definitely has an impact, I like to analyse what parts of the tracks are effective and how the crowd reacts to certain things. I’m sure all of these experiences make a difference when it comes to making tunes.

Do you prefer hardware or software?

Both are amazing, when I’m recording things it’s always from hardware. I think having a physical connection and jamming on hardware will always be far more fun for me than trying to use a software synth but the arrangement and some of the processing is with software.

What’s your favourite piece of equipment to use and why?

I’ve got a little effects pedal called the particle destroyer and it destroys everything. Makes it sound nasty.

How did your relationship with music begin? Were you surrounded by music growing up or was it something that you fell into?

I was always surrounded by it, there was always loud music playing in the house. Not much electronic music though, mainly a rock, pop, indie vibe. I’ve got a broad music taste and it’s played a huge part in my life but it wasn’t until much later I was exposed to electronic dance music. I never imagined it would be something I ended up doing but I got interested in DJing and it all progressed from there.

Do you feel that your experiences growing up shaped your sound and if so, how?

I have no doubt that these experiences have shaped my musical tastes and that it has an impact on the music I make but as I alluded to before my music making process is a fairly unconscious one and I only started listening to techno about 4 years ago so it’s hard to make direct links.

What are your top five tracks at the moment?

I want to build momentum and push the label and myself hard this year. There are loads of releases lined up for S.L.A.M so hopefully they will come out consistently, we also have plans to expand the merch which is going to be a fun project. I wanted to be a bit more active and make sure it wasn’t a long wait till my next release so I have a new EP almost finished and I’m also working on some more joint projects. 2018 should be a busy year and I’m looking forward to more gigs and more music coming out!