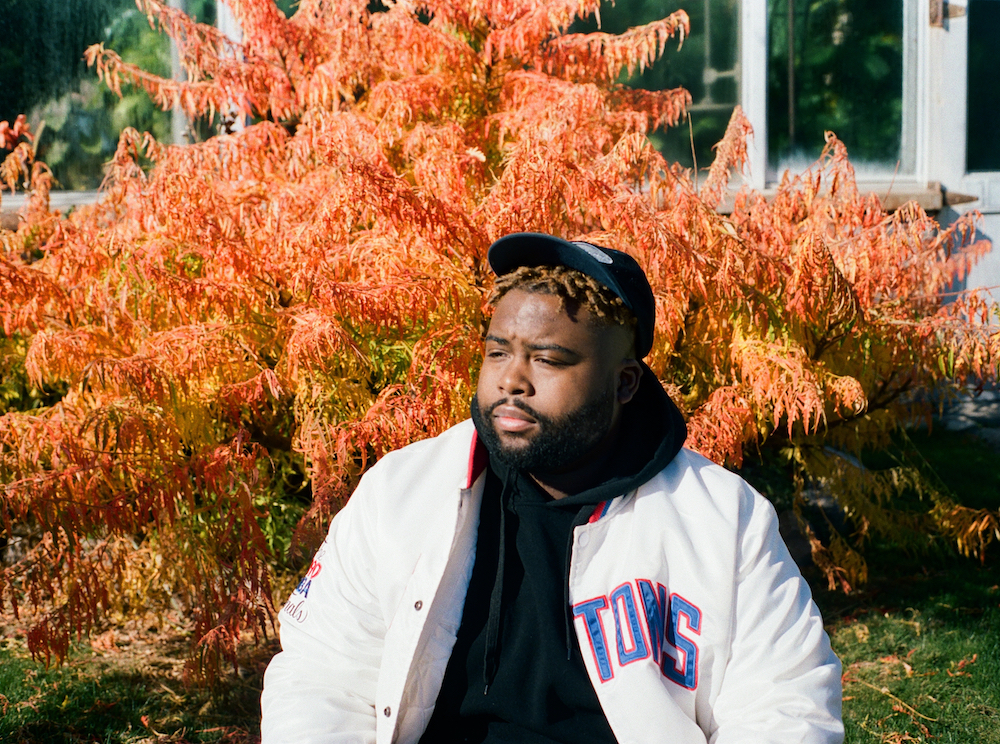 Introducing himself to a global audience with his debut EP ‘Control Mission’ in 2018, Huey Mnemonic has since released a self-titled EP in 2019 and launched his own label Subsonic Ebonics this summer with ‘Virtuosity’ EP. Creating the platform as a way of tapping into Detroit’s rich history and exploring sci-fi themes throughout the lens of Black liberation, Huey Mnemonic’s main goal is adding to the city’s legacy, and an important part of telling the story of Detroit music is owning your own platform.

Having grown up in Flint, Michigan, Huey’s early musical education comes from the sounds he was introduced to from his parents and grandparents, spanning across funk, techno, R&B, and house. Experimenting with Ableton and other PC software, Huey knew from around 16 years old that he wanted to pursue music and at the age of 24 released his first creation into the world. Alongside the earlier mentioned solo EPs, Huey has contributed to several compilations such as Haus Of Altr’s famed series and American Dance Music Vol. 2 as well as remixed for Escaflowne on Sorry Records. Very much inspired by his surroundings, Huey’s latest release, ‘Technician’, draws from various roles working within electronic manufacturing and as an SMT operator, reflecting the sounds he hears every day. Enlisting Murfreesboro, TN producer Max Watts for remix duties, we have the exclusive premiere below ahead of its release day this Friday.

With experience working within graphic design as well, creating the artwork for his label’s releases, we catch up with Huey to discuss his approach to production, creativity and working within two art forms, his somewhat recent move to Detroit, and the connection to futurism and sci-fi influences.

Just wanted to start by asking how are you doing? What has changed for you personally since lockdown was implemented?

Even with the political climate currently set in America, the constant attacks and murders of Black people, and negligence on all fronts by our government; I’m alright considering. A lot has changed for me. The biggest being my shift in focus on music and where I want to take my life.

Your next EP, ‘Technician’, is very mechanical and fit for purpose. Do you find that when you’re in the production process, you’re imagining where the track would be played/the setting that people would be listening to it in and that informs the outcome?

Not at all actually. Usually, I’m more concerned with what feelings I’m trying to express or what picture I’m trying to paint. The setting doesn’t matter to me because the context is still the same no matter the location or form of listening. However, I will say every track I’ve made this year I’ve heard myself say “damn I wish I could hear this in a club”. Please stay out of venues though y’all.

In the press release, it mentions that the release is the ‘soundscape of your various roles in electronic manufacturing and as an SMT Operator’, what motivated you to draw from this experience?

I feel a natural connection with rhythm, so whenever I was working I had these sounds in mind. Also, because I spent the majority of my time at work, I was always thinking about how I’d rather be making music. Since most music is drawn from experiences I took the one I repeated almost every day and made something good out of it.

How did the remix with Max Watts come about? What is the relationship there?

I was introduced to Max via the HOA comps actually, so big shout to MoMA. I spoke with him about the project a while back and he was on board immediately. I was also lucky to have him in my studio sometime after that and we just went on from there. So very glad to have him a part of the project. He’s a very talented person.

What do you hope people learn or take away from your music? What influence do you want it to have?

At first, making this music was to add on to the beautiful lineage of Black, Detroit and Chicago born music. To show respect for it; a homage even. It’s different now. I’m finding myself in the sound and molding my own identity. It’s a strange duality making music for yourself while subconsciously having the audience and even the DJ in mind. That might be a bit off-topic. Anyway, I want people to respect the music and what goes into making it. So much music out there is devoid of real feeling. It’s time to stop giving those people space.

There’s a lot of recurring themes of futurism, sci-fi and escapism within your work, both as a producer and graphic designer, what connects you to those themes? Who would you say you look up to within them as well?

As a child most science fiction I’d been exposed to always had a dystopian plot. Usually the byproduct of corporate greed or the rule of totalitarian authoritative figures. The futuristic visuals along with the resilience of the protagonist(s) to fight against, that was inspiring to me. But now that I’m old enough to recognize we’re all experiencing that in the now, I think I want to shy away from the dark side of those themes. I’ll always love Afrofuturism, cyberpunk, etc. but now I think I’d like to explore those sounds from a utopian viewpoint if possible. To quote someone I respect a lot: “There ain’t no escaping from this shit. We keep going”. To answer the second question, I’m not looking up to anyone anymore. Instead, I’m just appreciating the works they’re putting out into the world.

Outside of these themes, how would you describe your sound?

It’s still evolving! I’ve been trying to find it since the beginning. As recently as this month I’ve had a small breakthrough. It’s something I’ve been conceptualizing for a while now and finally, I think I have something to build from.

How do you approach the two art forms? What do they allow you to do?

The aforementioned themes play as much of a role in my design as well as my music. I took a break from design last year to fully focus on music, but I pick it up every once in a while. I approach(ed) design the same way as my music. What is it I’m trying to communicate? Whether it’s in the styling of an advertisement, artwork for music, or etcetera doesn’t matter. I think a good visual should be memorable and the best representation of another form of media or message. 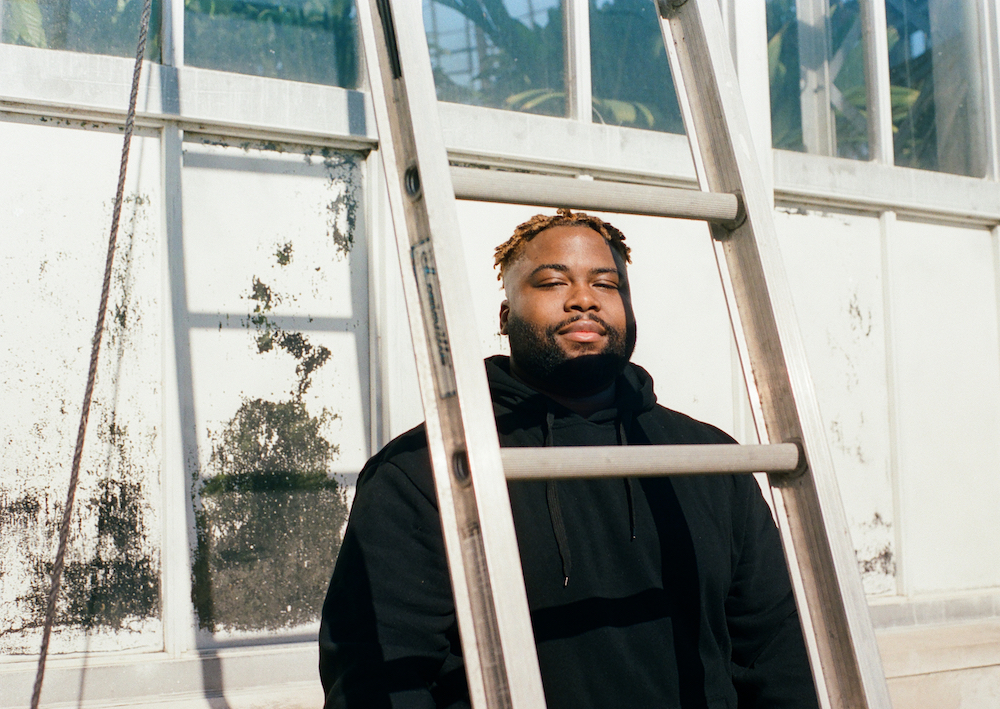 I knew in high school that I preferred creative careers. I was creating a lot of 8-bit / lo-fi (not in the current sense of the word) visuals and messing around in photoshop at that time. So I figured I’d go the design route or 3D animation. Since then it’s been a push and pull between music and design. I love both, but I put more time into music. I love exploring new (to me) ways of making things. The past 5-6 years I’ve been obsessed with analog synthesis. Tachyons+, LZX Industries, the DIY circuit bent culture of video manipulation. To me, it’s all interconnected. Also, the process of using what you have to create and allowing room for technological advancement is important to me.

When did you realise you wanted to be involved with music and pursue it with the intention of it being your full-time job one day?

Around 16 years old. I always had an infatuation with music studios and still want to own my own one day. I’m working to see it happen within the next 10 years. A place where I can make my own music and provide a space for others to make music as well. It’s a win-win.

You’ve also contributed to the Haus Of Altr compilations and released a bunch of edits in the last couple of months, how do you keep motivated? It feels super difficult now more than ever to keep up my normal work ethic, what do you do in moments of creative block?

I’ve experienced multiple blocks due to not having new experiences during lockdown, amongst other things. My hard drive is full of unfinished tracks, so I go work on those when I can’t make something new or I just jam out. I’ve accepted I don’t have to make music every day even though I feel a sort of pressure to do so.

What is your approach to remixing and creating edits?

It’ll sound boring, but it’s really just to take facets of the original and make it to my liking.

Would you say your music captures a moment in time for you? Does your environment and mood directly affect your productions?

The tracks are usually based on past experiences, my mood, or a concept. So, as far as the music capturing a moment in time, it varies track to track. My latest EP does that. It’s from me spending so much time working over the years.

How would you say your recent move to Detroit has influenced you both personally and as an artist?

It’s been phenomenal. Being around so many people making music and having conversations with the greats has been so inspiring. On a personal level, I think I’m a bit more happier here as well.

Who would you like to see get more recognition?

Everybody Black in the game. No bullshit. The reclamation of almost every subgenre of electronic music has been so exciting to see. I hope that the seemingly supportive acts of platforms, booking agencies, etc. of this year actually spark change for years to come. To give a few names though: Kesswa, John FM, Bale Defoe, D. Strange, and James Bangura. There’s many more, but that’s just a few.

At the moment I don’t have an answer for this question.

And what excites you right now?

The prospect of what’s to come in my sonic journey and my personal life from creating. There will come a time I’ll get to express myself in other ways and I can’t wait to do that. For now, though I’ll focus on music.

‘Technician’ by Huey Mnemonic will be released on the 30th October via Subsonic Ebonics – pre-order here.