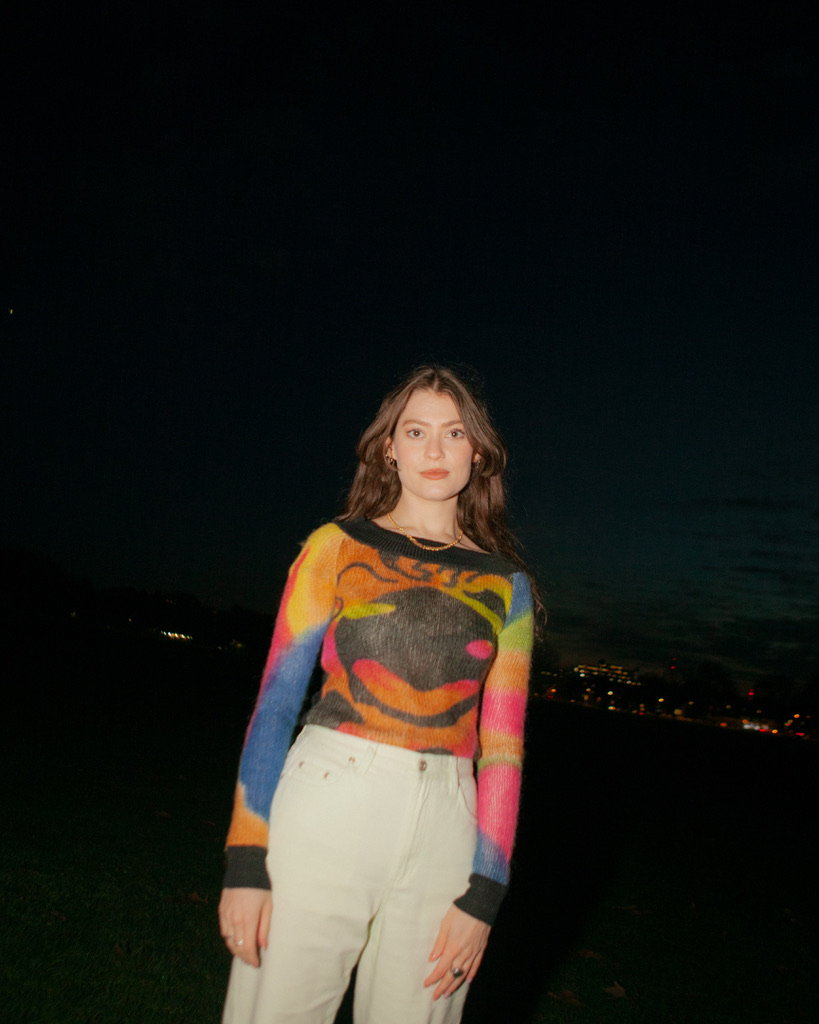 Moving to London around five years ago to study at Goldsmiths, Alexis started working at local community station Balamii all throughout her degree and ended up immersing herself in the world of leftfield electronics she is known for today. With the station’s DJs giving Alexis new labels and artists to check out, those years working at Balamii helped form and develop her sound and style – along with London’s vibrant nightlife scene. In 2020, Alexis expanded into production and kicked off the year with her debut EP ‘Refractions’ on All Centre and followed up with ‘Who’s there’ earlier this year on Left, Right & Centre.

Now a resident at Noods Radio, Alexis has shared lineups with the likes of Four Set, Objekt and Batu and this weekend will be playing for the Cabin Fever crew to celebrate their third birthday alongside Anthony Naples and DJ Python. Known for her hypnotic, bass-driven sets, we’re looking forward to seeing her play at the party and caught up with the fast rising artist to talk about her journey so far, approach to sets vs mixes, downtime routines and aspirations.

You previously mentioned that your first experience of the music you play now was from curating radio shows for Balamii – what was you listening to before? And were there any other sources or people you were going to at the time for recommendations

Growing up my mum played a lot of old house and disco, so when I was a child, that. When I hit my teenage years I was really into more indie stuff and then I guess came a bit full circle back to dance music when I moved to London at 18 and started working in radio and as a result of that getting exposed to so much different music I hadn’t really heard before.

People I would go to for music recommendations were DJ’s at the station I worked at, I would sit and shazam everything and keep a list in my phone notes of all these new songs I heard that I liked and would then go home and search them and go into a bit of a rabbit hole with each one about the different labels they were released on and then start digging through back catalogues. There was a DJ on Balamii called Wussah, who was one of the loveliest people I’ve ever met and an amazing DJ, and after his shows he’d give either me or my best mate who worked there with me the CD he’d burnt of tunes he’d played on show for us to have and play with.

What has your journey been like so far as both a DJ and producer?

Pretty eclectic to be honest, when I first started making music I made a couple overly ambitious tracks that I just put on my soundcloud which gained a tiny bit of traction, but I then realized that I thought I could improve as a producer and musician so took them off and got experimenting more. Which is when I started working on my first EP which was released last year with All Centre.

Production felt like a very natural path to take as I’d been DJing for a couple of years and had always wanted to make music, so DJing was my vessel into it I feel. I’m definitely still on a continuous journey both as a DJ and producer, and it’s something I always strive to continue to evolve and change and experiment with.

Did you have the sense of what sort of creative path your life might take?

I’ve always been a creative person, I paint and draw as well as making music and DJing, that was my first creative output before I had the tools and skills to make music etc. I also really love cooking and baking, which for me is something else creative and exciting. Because of all of this, I always knew I had to do something that involved creating things, I think I’d go a bit crazy if I didn’t have an outlet. But, I never really knew growing up what exactly that path would be!

Who or what would you say are your main influences?

My answer to this would change day to day, depending on what kind of mood I’m in, if I’m honest. There’s also so much and so many artists who inspire me it would be hard to nail down. In terms of DJing, Ben UFO never ceases to amaze me, so he is definitely an inspiration in terms of that. There are also so many amazing producers who constantly inspire me, LCY, Jennifer Walton, Loraine James, Koreless, the list goes on!

When you’re in a creative rut, what’s your go to methods for finding your creativity again? do you have any routines in place that help you mentally?

I wish I had a good answer and some advice I could give myself here lol. I find it really difficult, what’s helped me so far though, is taking a bit of time out. Stepping away from things both physically and mentally for a few hours, days or even weeks. I work quite slowly because I often find myself in these ruts. But I’ve found what helps me is just taking care of myself, going for a walk and being outside always helps, being on the move and getting to travel I find gives me inspiration too. Also doing something else creative that’s not what I’m striving to achieve, as I mentioned earlier, cooking something or painting sometimes helps me!

How do you approach your club DJ sets versus radio shows or online mixes?

For the last year not going out left me quite uninspired by dance music and club focused tracks, so I steered away from it completely for my monthly show on Noods. For radio I just play what I’ve been listening to at home really, a mix of punk, post-punk, folk and experimental stuff mostly!

Prepping for club sets is a totally different ballgame, it totally depends where and when I’m playing and who else is on the lineup. That usually gives me an indicator on where to start with prepping. I’ll organize my folder into kinda ‘genres’ I guess? To be honest it’s just my own little system that I don’t think anyone would have a clue what the labels and folders meant lol.

What do you hope to see change as we return to the clubs?

What’s your favourite track at the moment?

Hmm, again this changes on an hourly basis really haha, but at the moment Joy Squad by Koreless, the whole album is incredible.

What do you like to listen to during moments of downtime?

A bit of a mix of everything, kind of what I play on my radio shows, a mix of new an old, experimental, punk, indie, folk and everything in between to be honest.

Outside of music, what is bringing you joy / inspiration right now?

Getting to spend time with my friends and family properly again, dancing, watching lots of movies with my bf and cooking and baking for my friends <3

What are some of your current goals that you’re working towards?

I’m working on making more music and hoping to be able to share a new release soon, something a bit different to the last. I’m also working on a few collaborations and side projects which I’m very excited about!!

You can catch Alexis playing at the Cabin Fever party this Saturday at Venue MOT – buy tickets here.