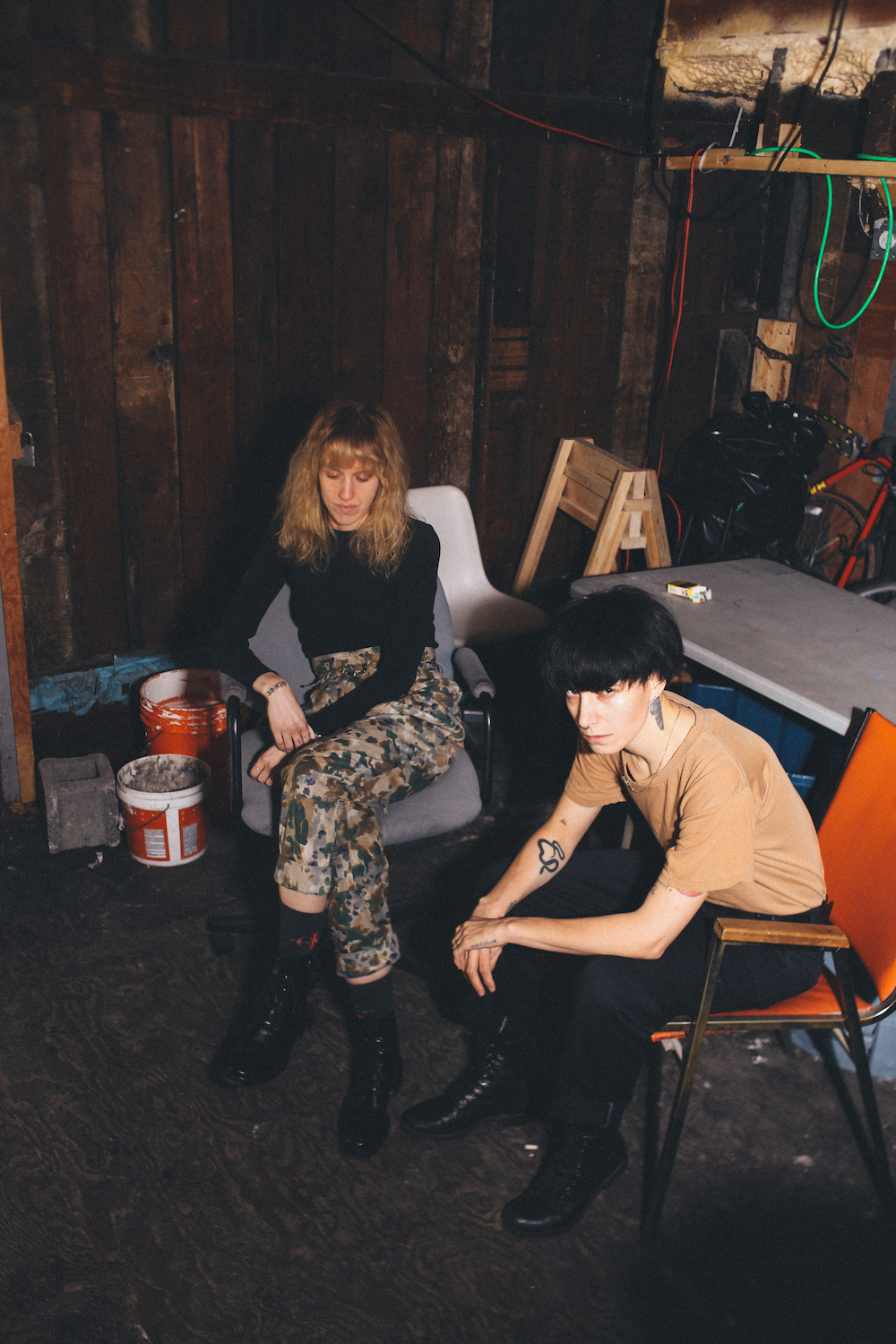 Hailing from Vancouver, Minimal Violence have been quietly releasing records as a duo since 2016. Landing on labels such as 1080p, Technicolour and Lobster Theremin, it wasn’t until the release of their debut album ‘InDreams’ earlier this year that I discovered them. Instantly entranced by their unique blend of hardcore, punk and techno, ‘InDreams’ is a relentless LP that pushes the boundaries. With show-stopping tracks such as ‘June Anthem’ and ‘L.A.P’ which take over the body, the album shows the depth of Minimal Violence’s productions. Then there’s the concept behind the name ‘InDreams’, relating to the out of body experiences that occur at rave, often surreal with a lot of twists and turns along the way.

There’s a lot of electronic music artists who have come from the punk world and moved into techno, EBM and industrial music specifically including you guys, why do you think this is? What do you feel is the connection there and what inspired your transition?

I feel like it’s all about post-punk, I don’t really think this is as much of a phenomenon in the world of straight up punk. Post punk already straddles the intersection of punk and dark wave, you start somewhere around Gang of Four…then you discover Bauhaus, which leads you to Nitzer Ebb or Chris and Cosey…its only a matter of time before you discover Psychic TV’s Jack the Tab album and venture into the world of Acid House, or you end up in the crossover world EBM/Industrial techno. In all honesty though it seems like a completely natural progression. At  the core of punk music is its DIY ethos, I feel like the electronic music community puts this into practice even moreso than the punk community. Being able to write, record and release an album without having to work with anyone else has felt like a completely freeing experience.

I don’t necessarily think that there is anything specific that inspired the transition other than wanting to have more control of the overall sound, but even so I don’t think I’ve (Ash) ever fully transitioned as I exist in both worlds still.

You previously mentioned that your sound has got a lot heavier and that maybe before you were exploring the softer side of punk, what do you think has driven the harder sound?

I don’t think it has ever been explicitly punk, before we were making softer music but still applying the same punk ethos, a heavy dose of curiosity with touch of ignorance towards the tools we were working with. The harder sound has undoubtedly been influenced by performing live over the years, we learned both what our crowds responded to but also what we responded to, what we felt best and most connected when playing. In addition to being harder our music has become more fragmented, playing a 7 minute loop live just doesn’t have that the same connection for us as a constant fracturing.

Sacred Sound Club basically started out as a few friends hanging out and learning how to DJ together.. we would share music and discuss artists we liked and for the most part these were artists that other groups in Vancouver were not interested in at the time. We felt like the only way we were going to get to play the music we wanted to hear and see the artists we wanted to see was to do it ourselves. We were just really excited to work towards diversifying the scene even if that meant that we were taking a loss on shows sometimes.

I don’t know if Canada is special in our relationship with collectives as I see a lot of really great collectives popping up all over the world but I do think that the strength of collectives really helps push forth individual artists. Especially feminist, poc and queer collectives which help with push forth the voices of underrepresented artists.

What is the scene like in Vancouver at the moment? Is it in a healthy place? Are there any Canadian artists you’d like to spotlight as driving forces of the scene right?

There are a lot of really talented young electronic musicians and crews coming up in Vancouver right now. To name a few, Overland, S.M.I.L.E collective (Baby Blue, J.S Aurelius, x/o, Jade Statues and Peace Field) and Nuzi Collective(Zam Zam and Venetta) are all taking risks and putting forth music outside of Vancouver’s comfort zone also bringing in under the radar out of town artists.

You recently released your first album for Ninja Tune’s Technicolour imprint ‘InDreams’. The lead single ‘envisions a fictional, dystopian megacorporation’, where did this concept come from?

This was partially inspired from a lot of what we were reading at the time and bits and pieces of research material for papers that never fully developed. Donna Haraway, William Gibson and Laboria Cuboniks Xenofeminist Manifesto were all bits and pieces of influence for the concept. In addition a friend had shown us the Seduced and Abandon: Body in the Virtual World ICA conferences from 1994 ft. talks with Bruce Sterling, Sadie Plant and more. These theorists discussing the potentials of cyberspace at its conception present a surprising amount of ideas that still resonate today.

Where was the album made?

The album was conceived in our studio at Deep Blue, we wrote and produced all the tracks there with some final mixing touches done with both Zach Treble of 1800Haight Street and Jesse Creed. I would almost consider are live sets as part of the album creation though, we were revising these tracks based on every set we played so If you look at it that way this album was made in clubs across Europe and North America.

Does your environment and/or personal life have a direct effect on the music you create?

I’m sure it does, I don’t know if either of us have reached a point where we are that in tune with ourselves that we are able to map the relationship of our that affect on our music though. I am aware of how environment effects my productivity at the very least. In my case at least (Ash) I struggle with working on music as much in the summer months since I feel the need to be outdoors as much as possible, wherein the winter I can just lock myself up and work on music all day.

What were the main influences for ‘InDreams’? Not necessarily musical influences but were there any films, books, art or any real life moments that helped bring this project to life?

InDreams certainly had a lot of influences outside of music. Cyberfeminism bears a large influence over the project. As well as cyberpunk motifs. These all provided the grounds for developing themes centred around the album. Graphic design was also influential when conceptualizing the album, we wanted to develop enough content (like the manifesto) that we could build a fictional world surrounding album. The idea was to essentially create an ad campaign around a fictional company.

Do you have a specific method to your production process specifically when it comes to long players?

This was the first time we had wrote an LP and the process although similar to how we would write an EP was a bit more complex. We actually created InDreams inc. as something to hold conceptual ground over the album an allow us to have some outside limitations to refer back to when putting the album together. We wanted to compose something that had the feeling of our live sets but carried the arch of an album. Something you could listen to from front to back and feel complete by the end. 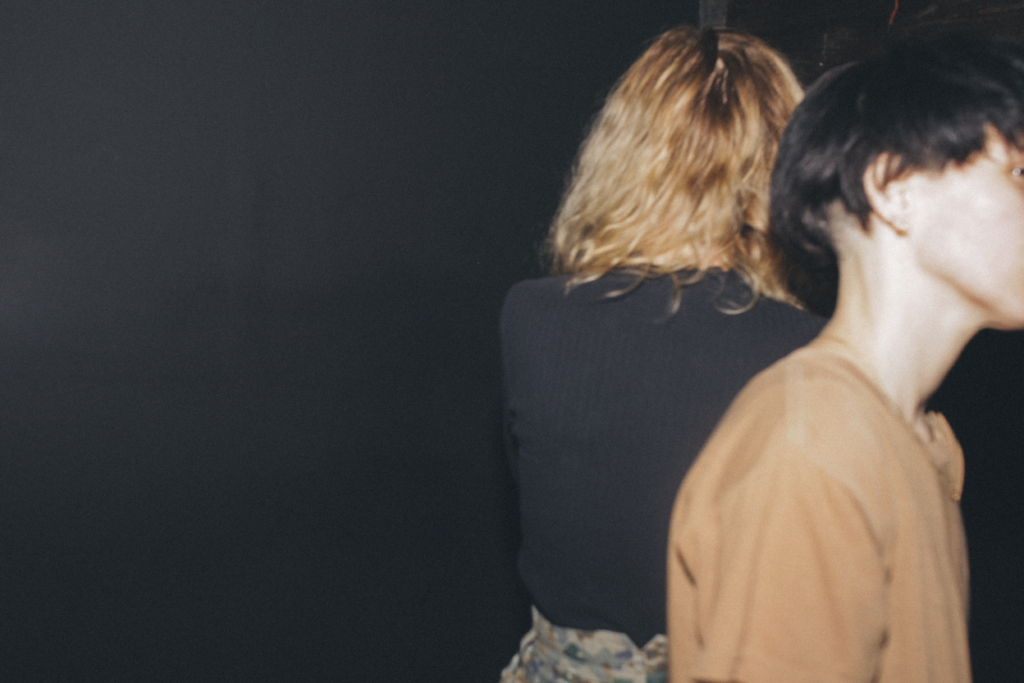 You’ve mentioned how you were both obsessed with lucid dreaming when you were younger – why lucid specifically? Do you believe that there’s deeper meanings behind your dreams?

Ash-personally lucid dreams for me were an escape from reality, when I was younger I was often put to bed much earlier that any of my friends, I was shut out of a lot of social activity, dreams where a place I could escape the dreary-ness of my actual life.

Lida: I very rarely remember my dreams, but when I do it usually leaves a mark. The content can be powerful, haunting, and the feelings experienced when asleep are just as real as those you may encounter when awake. Just being aware of the ways in which waking life permeates sleep and may mutate, or what exactly your subconscious brings to the forefront.

What’s the story behind your t-shirts ‘the body is meat but the mind is unlimited’?

It promotes the idea of divorcing your self from your physical state. Their are limitations presented by the body that can be overcome by the mind. This also returns back to the idea of InDreams inc., this slogan is meant as a promotion for the company itself. InDreams inc. exists as a platform for the commercial distribution of dreams. The company offers an alternative to material existence, arguing the validity of psychic reality in relation to physical reality. If you believe your dream life is just as real as your waking state then InDreams inc. can offer you the ability purchase your future.

Do you feel that you belong to this world and time?

Lida: No not really, but I don’t romanticize another time period.

Ash: I do actually. Is that strange?

‘InDreams’ by Minimal Violence is out now – buy here. You can also catch them playing at New Forms Festival, Vancouver from the 25th to 29th September – buy tickets here.