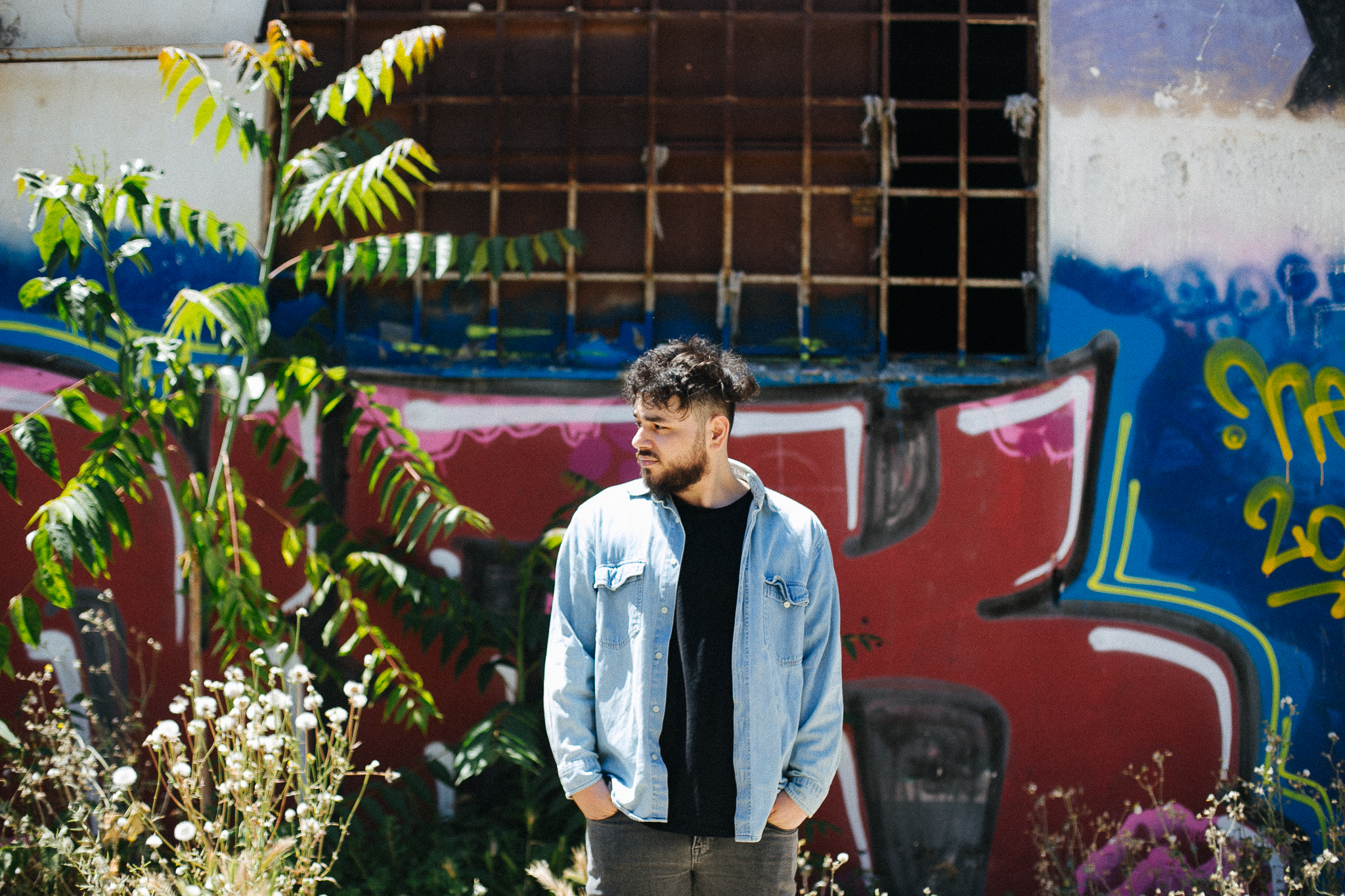 My research tells me that Greece, Athens in particular, had one of its biggest electronic music moments in 2011. It was with the help of Swaf who released the LP ‘Flaws’ and marked a new era for the industrial scene. And despite the economic crisis, nowadays the scene in Athens is building up, with the city on most major touring DJ’s schedule for spring/summer.

However, for DJ, producer, label owner and promoter Bonebrokk (real name Marios Naris), his love affair with electronic music started with Daft Punk. Having been lucky enough to have access to the world wide web at the age of 14, Bonebrokk discovered the colourful spectrum of bass music coming out of the UK from labels and parties such as Livity Sound, Hessle Audio, Swamp81 and Night Slugs – all now cited as key influences for his Trial & Error imprint and club night. Launching in 2017 with his debut EP ‘Hollow Systems’, the release was followed up by a record from Dervisis (featuring remixes from Gramrcy and BFTT). Now he returns with the brilliant ‘Athens UHD’ compilation, a 15-track collection showcasing the wealth of talent in Greece right now. Featuring music from Ice_Eyes, Jennisek, Giganta, Dervisis, Aroent, ΑΣΤΥΤΕΚΚ, Bonebrokk himself and more, it’s a detailed outlook on the exciting contemporary Greek club scene. Being released on the 3rd April, we speak to Bonebrokk about his fist foray with electronic music, his journey so far with Trial & Error, what makes the scene in Athens so special and the things that excite him the most right now.

I think my first introduction must have been Daft Punk. I was born in 1990 so my first time listening to anything electronic/club must have been one of their huge hits through radio. I did not happen to come across much else at that time, but since I became a big music nerd during my teenage years, I was reading a couple of music magazines mainly focused on Indie stuff, which still covered some more electronica leaning artists. I remember one compilation of Sonik magazine, one of the few decent magazines from the time, named Greek Electronica or something similar with a variety of Greek, mostly electronica, producers circa 2004. It was fun. I was a more Indie-Rock follower then but I still enjoyed it. Then when I was 16, Burial happened, and since I was lucky enough to have internet access since I was 14 a brand new world opened up to me.

How would you describe the scene in Athens? What makes it special to you?

Speaking of internet access, I think it has has a lot to do with spreading underground club stuff through the globe. Therefore, right now, in Athens, you can listen to stuff influenced by every micro-scene in the world. A traditional raw aesthetic, which has to do with the city herself, covers most artists’ productions and that makes it unique. There are tons of small groups of musicians/artists, who create super interesting stuff and even if there is no major ‘Sound’ describing Athens yet, those many groups are what make it appealing to my eyes. The ‘Athens Sound’ is something that may not yet exist, but I think we are closer to that than maybe 5-10 years ago. It is really interesting.

You run the record label and party series Trial & Error, what motivated you to launch it? Is this something you’ve always wanted to do?

TNE started as the home for just my own productions but as I started doing club nights and releasing stuff, I realized it could be much more than that. Meeting and playing with people I admired artistically ended up having a great effect on me as much as the Dubstep community had. Dubstep for me was the pinnacle of communities I grew up with. Even though I experienced it mostly online and through some local nights, it was so inspiring to see innovative producers sharing the same ethos and passion. Maybe I was and probably still am a romantic but I saw all of them as friends/buddies who played the exact type of futuristic music, along with the photographers and journalists who were documenting and pushing this sound. I have realized that many of the artists I follow to this day, had been influenced by Dubstep the same way, which is interesting and in a weird way relieving.

That made me want to create and push the sounds that came after Dubstep when I was finally good enough technically and mature enough to be a promoter. Hessle Audio, Livity Sound, Swamp81, Night Slugs, were some of the labels I followed religiously and had a profound effect on my own vision, they were the blueprint.

What are some of the main issues you face running Trial & Error?

The key issue is mainly the economic side of things. Not having any chance of sponsorship of any kind puts the whole financial weight on my shoulders which is fine but things could go a bit faster if there was more support. Communication wise, the same factors that make TNE stand out are the same ones that make things a bit more difficult for us.

TNE is based in Athens and at least for now releases Greek producers who are sonically influenced by worldwide sounds and movements. That may sound strange to some people who were used to listening to stuff made by people in the metropolises. For example, my first TNE 12” was categorized as ‘UK’ on Hardwax, which is kind of funny but perfectly justified for me, but some people were critical of the whole Greek-guy-releases-UK Bass. Luckily, I have met tons of people worldwide who do not care where you are from or where you are based, they just want to listen to good music and even collaborate. I was a bit scared at first, but right now, the big majority of people are much more open-minded and they even crave for stuff outside of the usual places. Labels like SVBKVLT give me hope that this is the case now.

What are you most proud of since launching?

The release party of ‘Hollow Systems’ at Mpagkeion Hotel, a really old four-story hotel in the heart of Athens, which is now used as an art space. As far as I know, it was the last music event that took place there because there was some fear that the place would one-day collapse. We take safety seriously so we adjusted the soundsystem to the specifications of the space, lower than usual volume, just a bit of sub-bass so there was no real problem. For this event, I booked Gramrcy as our first ever-International guest DJ along with live sets from Hydroessa of Athens label Lower Parts and Jay Glass Dubs who had provided a Version in the 12”. It was really special, the place was crowded and we all had a great night to remember. Fun fact is that I still get emails about booking international artists to play in this specific venue. I only wish I could.

Could you talk us through your forthcoming Athens UHD compilation? What inspired you to curate the compilation and how did you go about selecting the featured artists – what is your relationship to them?

I have been meaning to put out a GR only compilation since I started Trial & Error. I had been playing with lots of local artists, it seemed logical, and something I would categorize as challengingly interesting. The initial idea was to name it 2029 as a not-too-distant future soundtrack but the tracks ended up being more of a soundtrack to Athens right now. I originally proposed to 30 artists and cut it down to 15 due to availability issues. I personally know most of the artists because a major proportion of Athenians interested in this type of sound are the same as the people usually djing/producing/ promoting them.

What do you hope to achieve with the release?

There are two aspects of it. Making international audiences aware of these artists and the variety of sounds created in Athens. As it seems logical, I have seen feedback from many sides of the world, pleasantly surprised that this type of futuristic sound exists and is created in Greece. I could not be happier for something like this. The other side of it is proving to ourselves that we can create releases like this and be really proud and satisfied of all kinds of results, artistic and feedback wise.

Is there anyone you would like to shine a light on in Athens or Greece in general that isn’t involved with the compilation?

FlokosH, DJ Problems, the Hypermedium guys, Spivak, Cannibal Radio, KAWRS team, Shuffle nights, the guys behind Movement Radio, Echo Canyon, Romantso + Temple clubs, and the Homcore store are some on the top of my head 🙂

Now going back to who you are as a person and artist, who would you say has been instrumental to shaping who you are?

Many people for a variety of reasons.

Flying Lotus’ Cosmogramma was the first record that made me completely ‘denounce’ Indie-Rock and download Ableton Live.

Hideo Kojima for his unquestionable vision.

Peverelist’s constant low-profile leadership and for replying to my emails even when my music was really bad.

David Fincher for his mind-bending movies.

Nic Tasker and Batu for evolving the hardcore continuum.

Mark Fisher for putting some words in some of my own blurred thoughts.

I think it is something I have always remembered being. From constructing my own quilt-furniture-made castles to designing my own imagination’s board games as a child, I always liked to experiment to keep me out of boredom and have fun.

And do you have any routines in place that helps keep you creative?

Not really, I will just watch/read documentaries/articles if I feel like cheering up which usually makes me consider stuff and end up opening my DAW.

Do you think growing up in Greece has had an impact on who you are both as a person and artist?

Of course, for better or worse, it is difficult to escape your own upbringing. The only thing you can do, at some point, is to choose what you would like to keep and what to avoid.

What keeps you inspired outside of music?

I am a video games nerd, the title of my own Athens UHD contribution ‘Nessus Chant’ is inspired by Destiny 2’s planet and in general, I love quality sci-fi. Films, series, books, games, pretty much anything referred to the/a future immediately grabs my attention.

What does your life look like when you’re in between projects? What do you enjoy doing outside of music?

Video games, video game streams and series watching are my go-to entertainment besides music. They can be as distracting or influential as I make them be.

Obviously there’s a lot of negativity in the world at the moment, but I wanted to ask what is something that’s positive in your life right now? What is bringing you joy and what are you looking forward to?

I would place Music in the top of my list and the latest UK bass/ Club hybrid is something that I am extremely excited about. In addition, sound design plays a major role in my own creations lately and since I have gotten a lot better recently, I could not be happier. Finally, yet most importantly, my friend T keeps constantly shining light to my life and I will always be thankful to her.

And what would you say is the best way to support those in the industry during this time?

Just buy music, if you can, then tell all your friends about it. Bandcamp is my preferred choice of stores but anything would help really.

‘Athens UHD’ compilation will be released via Trial & Error on the 3rd April – pre-order here.