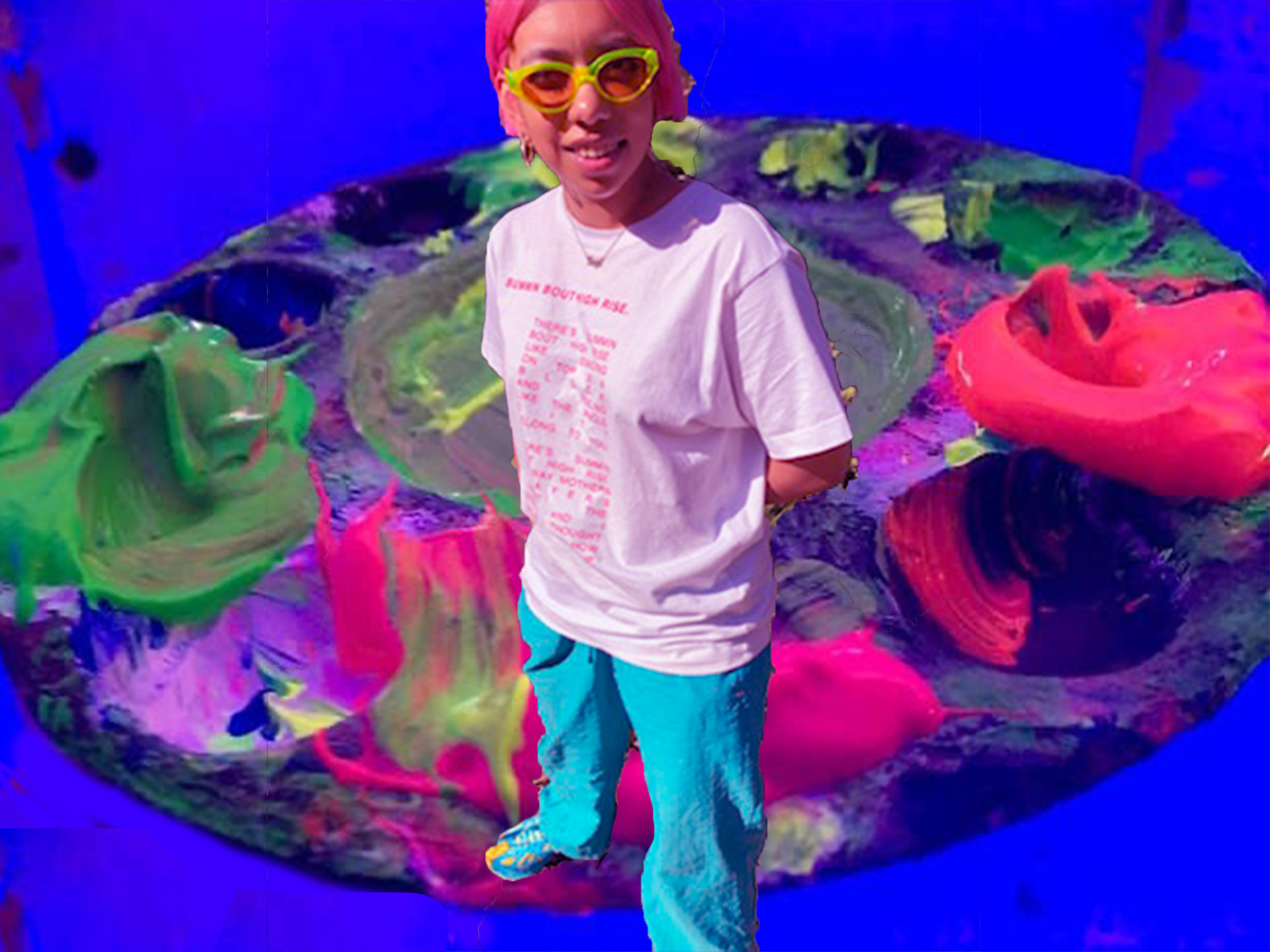 Cheeky, fun, and vibrant with a hint of nostalgia – that’s how you would describe Angel D’lite’s sound and style. It’s playful, sugar sweet and youthful, with her DJ name bringing us childhood flashbacks of the powdered dessert product which turned into a mousse once mixed and whisked with milk.

Based in London, Angel D’lite is closely intertwined with the city’s DIY party scene, playing at venues such as Corsica Studios, Grow Tottenham, Dalston Superstore, Venue MOT Unit 18, and The Waiting Room (previously under the name A Boy From Outer Space). There’s also the aptly-titled J’adore Hardcore show on Netil Radio. Earlier this year Angel D’lite made her production debut on the now Berlin-based label Banoffee Pies Records with ‘Dolphin’s Have Sex For Pleasure’ which included the excellent ‘Crystalz’, a high NRG rave track with Britney Spears sample included, as well as contributed to the first Super Drama compilation, ‘Family Drama Vol. 1’.

Fast becoming one of our favourite artists, we got to know Angel D’lite a little better, discussing her musical journey so far, some of her favourite pop records and what she’s been discovering during the lockdown.

What was your relationship to music growing up? What were some of the first records you were introduced to?

When I was growing up, Sugababes and the Prodigy were my faves and I didn’t properly start getting into ‘dance’ music until about 5 years ago. I was mainly into 80s synth pop and all the waves before then. The first record I ever bought was a blue 10 inch speed garage remix of ‘Yeke Yeke’ from a charity shop in Lewisham along with a copy of Kraftwerk’s ‘Man Machine’ album. Both of which I still play today!

How did you first get involved in the rave scene?

I think it started at Grow Elephant, about 6’ish years ago (what Grow Tottenham used to be before it had to move) and meeting interesting people who were into good music. I guess going to underground parties and not being into ‘clubbing’. There are some parties that I have been going to for years like KAOS, and friends I made there introduced me to lots of wicked underground parties and afterparties.. I played at this festival called The Tower a couple of years ago and met lots of wicked people, some of them booked me for their wonderful raves and some of them I have been dancing and raving with for years now 🙂

I guess so, my mum was very encouraging of me to draw when I was very young and I had the whole house plastered in drawings at one point. I have always done creative things I guess, even whilst working bar jobs when I was younger. But more recently I have painted murals at Glastonbury, and painted sets for fashion and editorial, which is my day job.

You’ve contributed a track to the first Super Drama compilation with ‘Aquatic Riddim’, and also previously remixed a Super Drama track, how did your relationship with the duo begin and how did you get involved with this compilation?

I think we’ve crossed paths dancing at Dalston Superstore and catching each other playing, and through friends of friends.. Something to do with a Korg Monologue too. I forget. I’m really glad they reached out to me for the remix though. It opened up a whole load of windows for me musically and creatively, and inspired me to make more way more music during lockdown. So I’m super grateful to them for that!

The Banoffee Pies EP, ‘Dolphin’s Have Sex For Pleasure’, features a Britney Spears sample, could you tell us 3 of your favourite pop songs?

What’s the story behind the EP name?

I has gone to check out DJ Marcelle at the Waiting Room, and my friend Tom has a very cool T shirt that says ‘Dolphins have sex for Pleasure!’, with a lovely airbrush painting of 2 happy dolphins.  – ‘Female Dolphins Appear to Have Sex for Pleasure and Orgasms, thanks to their Well-developed Clitorises’ so Scientists Say….

What’s your approach to production? Do you usually start a track with an idea in mind or is it mostly improvisation when the creativity hits?

Its never the same approach, sometimes it starts because I have an idea for a vocal that I want to sample or I might just start playing something on my keyboard and trying out sounds, then I might hear something else over it in my head. They NEVER turn out how I imagine they will and sometimes tracks change entirely not having ANY of the parts it had when it started out. DJing for a good few years before I started making music has definitely made it easier to merge sounds and rhythms together, and actually also vice versa!

Do you need to be in a particular environment to be able to work?

These days I can become stuck to Ableton if I’m feeling the vibe for a whole day straight, especially if I’m at a window with the sun shining. Although all of the best things I’ve created i’ve started on between 12am and 3am 😉

From your aesthetic and sound, everything is super vibrant and fun – where does this come from? What inspires this?

Haha, well thats nice to hear. I love the sunshine and I love dancing in it.. Its not a conscious decision – Im always have been a lover of energetic, euphoric music – I can’t explain the love of bright colours though.

You mentioned YouTube digging was how you spent most of your latter teenage years, were there any particular channels that you would always go to?

Unfortunately I wasn’t that advanced. I wasn’t very organised either. I wouldn’t have known it as digging. I wasn’t buying the records or downloading it, I was just saving it to my favourites!

Have you discovered anything new in lockdown?

SO SO MUCH. I have been doing my radio shows from home and all my mixes etc have been on vinyl (coz thats all I have at home) so it was really amazing to share all the digital music I have been finding on my last radio show, J’adore Hardcore, and I imagine the next one will be more of the same. I haven’t been digging as much as I normally would as I’ve been working on making music music on my days off.

I have been really enjoying DJ Fart In The Club’s mixes during lockdown, a LOT. 100% vibes always. There are a couple of compilations I’ve been enjoying, For The Massive (4TM001) & Ground control VA (UTECD001). Oh And the new Dream E I am banging every morning, but other than that I’m pretty stuck in the 90s (lol)

What’s inspiring you at the moment?

Mostly my friends music, Tim (A Psychic Yes) – so much amazing stuff that I’ve downloaded on the Bandcamp days.. hearing sexy wubby chuggers from my housemate JAY’s room.. We make very different stuff, but it’s really great to hear each other working away, inspiring each other; and especially my friends Joe & Louis AKA local group’s (L Major and Corporeal Face) new unreleased stuff. Everything they make totally blows me away. As I’ve had lots of time to play my records at home during lockdown, which has been really inspiring for rediscovering things years later with fresh music making ears… 90s hardcore, rnb, lots of old bleep and there’s lots of new wicked garage coming out at the moment, like the new one on Peaky Beats with Eliza Rose. I’m working on a kind of 2 step thing with some incredible vocals from Ell Murphy which is a kind of ode to the rave, inspired by our desires for dancing til the morning with all ya m8s in the field or at the club… 2021?