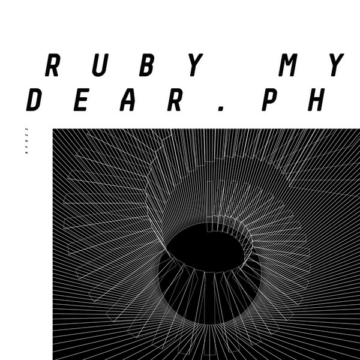 This is so hot off the press that if you touch your screen you can still feel its warmth… Analogical Force is a label that has built up enough of my trust for me to blindly believe that everything they release will be excellent. And holy hell, my trust has not been betrayed here. This song is a big fuck you to anyone who might want to typecast Analogical Force into a category dubbed something super vague like ‘melodic IDM’. This is completely unlike anything that has come before it, it flits between breaks and techno with such abruptness and confidence that it really disorientates you. Your mind wanders for 5 seconds and when you return it sounds like a completely different song. At the beginning its sound fits snugly somewhere in between the wonky electronix of Gábor Lázár and the rave weapons of Head High. The breaks are titanic and the stabby chords are really cool. I really like the intricacies of the sound design as well, confirmation that Ruby My Dear really knows what they’re doing in the studio. The song then morphs into something else entirely, with a rolling build up and then a drop that is so monstrous that the only thing I can suitably compare it to is Objekt’s CLK Recovery – yes, it’s that good. I’m surprised the UN Special Commission hasn’t investigated this song because it is a serious threat to national security.

I have been so excited about this LP for so long. Lou Karsh is one of the most exciting names out there at the moment and everything he has released so far has been gold. For a relative newcomer to the scene, there is so much depth and maturity in his songs and the sky truly is the limit. I’m writing at this very moment with the anticipation that this record will be waiting for me at home when I get in. I think I mentioned a few months ago about how difficult it can be to get your hands on Furthur Electronix releases, but my trigger finger was extremely rapid when I saw that this was available on Subwax. They call me the fastest hand in the East… of London. Everything I’ve heard on this record so far has been brilliant. Admittedly the songs don’t stray too far away from electro beats and 303 wails, but there is enough variety in mood and atmospherics to still make it an essential purchase. This is one of the moodier and murkier songs on the LP, with a sharp, crisp beat and a deep, druggy acid line that will entrance you into doing unspeakable things. It is reminiscent of a couple of Donato Dozzy tracks from his Filo Loves the Acid LP. This comparison reiterates my earlier point, that for a new producer to be in the same league as someone so accomplished as Dozzy shows how much potential he has to dominate the scene for years to come. Remember the name.

This is probably the best thing to have come out of Perlon in years. This statement might be sacrilege to some, but I am very far removed from the Perlon circlejerkers in Berlin so I don’t mind ruffling some feathers. I was surprised by how much I like this song, as it doesn’t really fit into the sort of music that I would play out, and it is too dance-focused to be something to listen to on a lazy Sunday. But every component is flawless. The beat manages to be dusty without being lo-fi, and driving without being forceful. The pads are subtle, warm and inviting.  The melody also complements everything so well. It flows so smoothly and its narrative is not at all dominating. It’s almost like a warm breeze accompanying a beautiful sunset. I can just imagine this being the perfect song to soundtrack the dusk at somewhere like Club De Visionaire – Berlin’s spiritual home for minimal – a song suitable for the dancers and the loungers. Its beat is urgent enough both to loosen your limbs and to make your toes tap. This is proper deepness that has firmly put Perlon back on the map.

They definitely do NOT make tracks like this any more. Trance in its pure form is a genre that is basically dead. Trance influences are there to see (see Kulør and the Copenhagen techno scene which is heavily trance influenced), playing goa-trance at 33rpm is an innovative technique championed by Vladmir Ivkovic and Ivan Smagghe that has proved hugely popular and there are great sub-genres such as the neo-trance abstractism of artists like Lorenzo Senni. But I would be very surprised if you managed to find a producer nowadays that is making trance/progressive house in this mould. This is not hugely problematic though, as there are plenty of amazing records from the 90’s that are still to be discovered. You wouldn’t have to look very hard to eventually stumble across this record, as Moby is as close to a household name as you can get in electronic music. But this should not discount anything, as this is absolutely exceptional. I really like how much patience and restraint is shown. Each component is given space to breathe and develop, and this leads to such a satisfying crescendo. The strings arouse a lot of tension and the choral melody is very pleasant. Things start really kicking off at about 4 minutes, when the strings start to take over the song and the vocal samples really start getting exciting. The breakdown gives a momentary relapse before everything kicks back in a stunning climax, an orgy of euphoria. It is hyperbolic and verging on cheesy, but I would play this in a heartbeat to the headsiest, most chinstrokey techno crowd going and expect them to lap it up. I think that this is pioneering in its sound. Something like Rising Sun’s Hacienda would never exist without this. Considering that is a piece of music verging on a masterpiece, that is enough reason to dub this song as special. But this deserves to be appreciated not just by what followed it, but by how incredible it is in its own right. This is a song that shines brighter than the sun glancing off Moby’s bald head.

Oh yes, oh yes! It’s that song. A video of Zip playing this at Closer in Kiev has been doing the rounds on social media for years, garnering hundreds of thousands of views and turning this rare, obscure house record into one of the most sought after gems of recent times. Unfortunately, I am one of the many, many people whose jaw was touching the floor at the quality of this song and did everything that was necessary to make sure that I owned this record. In this instance, that meant parting with more money than I am willing to admit. Someone in Italy is currently very smug that they prised so much money from a schmuck for a circular piece of plastic. But listen to this and honestly tell me that this is not worth owning. It is as close to a perfect house song as I can think of. The synths are gorgeously atmospheric and cosmic, the wailing vocal complements everything beautifully, and the melody is innocent, hypnotic and insanely catchy. When the drop comes in and all of the different parts of the song finally come together, it brings me a satisfaction that is almost impossible to replicate. This is a song that is virtually like nothing I have ever heard of, yet has the warm familiarity of a record that I have known and loved for many years. A song that will never grow old on me, that I will never get bored of and I will treasure for the rest of my life.