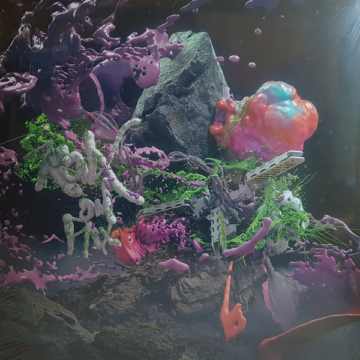 Music From Memory continue their excellent track record by finding some of the most obscure and rare music never to be previously uncovered. Their new Outro Tempo compilation, focusing again on the immense musical output of Brazil, finds even more gems to treasure and hold dear. This is by far my favourite song from the LP. Heavy, lingering synths floating full of suspense provide the ambience, while guitars and twinkling chords perfectly complement the atmospherics. It manages to be both cosmic and distinctly latin at the same time, which is a combination I never really pictured together, but now I have heard it I wish they were twinned together more often. It reminds me a bit of something that Suba/Rex Ilusivii’s would make, who coincidentally resided in Sao Paolo, so there are clearly South American influences at work here. The vocal at the end is also really cool, sounding like a spell is being cast on the listener. Whether she is offering you wellbeing and happiness or condemning you to eternal damnation is something I haven’t quite figured out yet, but I guess we’ll find out won’t we?

Yeah I know. Liking Madonna probably isn’t edgy. She does seem like a bit of an arsehole and she definitely is past her time. But there is no denying that this song is an absolute belter. The 80’s really were a golden age for pop music, and this is a shining example. It was a time when the producer was king, and you can really tell how watertight the production is here. The individual elements are flawless in my opinion, from the drum programming (which aren’t a million miles away from the drums on Charlie’s Spacer Woman if you listen…) to the awesome little twinkly chord line. You bet your bottom dollar that if you played this at a disco party it would be met with smiles and cheers. Yeah if you are a techno purist then you will probably hate this song. It is undoubtedly big production at its most hyperbolic. It’s squeaky clean to the point that it’s gleaning, and the vocals are as big and glossy as you can get. But man it’s catchy. It’s cheesy without compromising in quality, and I would be lying to you if I said that it wasn’t my favourite song at the moment. If you disagree then you’re basically admitting that you hate fun.

This is a reflection that I really am diversifying the sounds that I listen to, and that I really do now like Drum n Bass and Jungle. You would think that this would be self-evident consider how much attention I usually focus on breaks and electro tunes, but my friends will gladly tell you that this was not always the case, and that I generally used to regard these genres like something you would find on your shoe at… well, a Drum n Bass or Jungle rave. But, narrow minded me never truly realised how much euphoria and sophistication could be packed behind these complex drum patterns. This is a prime example. The atmospherics are gorgeous. The bassline is deep and dubby. The beat is urgent and energising. It is perfect closing music, and I can say this with confidence as it was means-tested at the Pickle Factory aka. the Sauna last weekend, when I saw Eris Drew and CCL play there. This was one of the last songs, played a bit slower so that it sounded more electroey than at its normal speed, but nonetheless was fitting and an excellent choice to set the mood for the end of the night. I like how it has those emotions you look for in a closing song, but it isn’t a euphoria explosion like other tunes I usually reach for at those times. It seems intelligent and mature somehow, which I appreciate. It also seemed to me to somehow channel the hardcore/rave sounds of the 90’s, maybe through that fractured vocal. Maybe it’s because I attribute this song to the end of a long session of those kind of tunes, but even if it is just me making that emotional connection, the other side of the coin is that CCL played this because those genres had been rinsed, and this was a suitable tune to complement the vibe of the night. Ultimately I can’t answer that question, and you’ll have to pester CCL to get that answer. But anyway, I have digressed a bit and probably gotten a bit too philosophical, but this is sick, and if you didn’t already know it, you’re welcome.

Gonna have to credit Jane Fitz for pointing me in the direction of this one. All hail the queen of wigglers and wonkers, who can take credit for finding another scalp of my record collection, to add to the scores of others. I found it quite funny trying to think of an adjective or a verb to describe the synths of this song. The thing that most came to mind was ‘meandering’, and then I saw hang onnnnn, THAT’S THE NAME OF THE SONG. How cool? Definitely not very cool, and almost certain my subconscious telling me how much of an idiot I was being. You can just tell that this is a 90’s house record. It has its fingermarks everywhere. The beat and bassline pongs of the 90’s tech house style (back when tech house was actually cool… and good) and the haziness and deepness is of an essence that simply isn’t captured in modern records. This is a song to listen to as the sun comes up. It sounds like the soundtrack to a new dawn being ushered in, the bassline exemplifying the world coming to life and greeting the sun dancing off of the ground. It is melancholic and uplifting at the same time, whilst also being a proper club track. The beat is properly driving and I can imagine it spurring the dancers on for just that little bit longer. Really classy stuff, and hats of to the Fitzmeister for pointing me in the direction of ANOTHER banger.

Finally, I hear you say, some music in this feature that is actually new and not at least 20 years old! Quiet there at the back, but yes, this is very new and it is very impressive. This song is soooo me it’s a joke. Cloyingly euphoric chords, check. Wicked beat and bassline, check. Played by Ben UFO and therefore a certified banger, CHECK. I confess that I didn’t really know much about Konx-om-Pax before I heard this song, but having bought and rinsed this album I am now a huge fan. This whole album is excellent, a great mix of IDM nonsense, controlled bursts of euphoria and reliable club bangers. It has it all. But this is most certainly the jewel in the crown. One of those songs that defines a night, a DJ, a whole Summer. I just know that this is the sort of song you will talk about in 20 years time when you reminisce with your friends about that Party, and that set, and that song. It is accessbile enough to appeal to the masses, yet containing enough quality to get veterans hot under the collar. This is easily song of the Summer material, and if this is the first time you’re listening to this, remember that Dr. Blowfin showed this to you. Expect to hear this if you see me play over the Summer – whether that be in London or Berlin. Might as well call me Mr. 305 aka Mr. Worldwide.