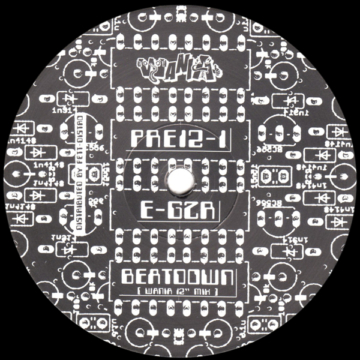 What an attention grabber this is. The first time I heard it I very dramatically sprung to attention on the train and thought ‘What is this?’  That four bar loop is so comforting and dreamy, and completely captures the essence of summer and youth. I kind of regret listening to this song in February and not in the middle of summer. Its euphoria is hyperbolic, its chords shiny and glossy, its tone unrelentingly positive. But all the while it remains incredibly sophisticated and mature. This will inextricably be down to fact that Edgar Froese is the co-founder of Tangerine Dream, which is, you know, one of the best and most famous electronica artists of all time. The song toes a fine line between quality musicianship and cloying ecstasy, and I think it is really impressive that a song can be this happy without being overbearing. The full version of this song is actually 22 minutes, but I know that most people don’t have the attention span nor time to bother to listen to it all. The first 7 mins is the best bit anyway, so the first 7 minutes is all I’ll insist you listen to. I should also note that there is an edit of this which has a beat underneath it and turns this into an amazing dance track. Intergalactic Gary has it but I don’t know who else does. I would just like to put it on the record that if you know of how I can obtain this edit, I would be willing to do unspeakable things to my conscience and body to get my hands on it.

Well well well, Detroit is in the house! There must be something in the water of that city, because a song with this much groove can only come from Detroit. This is an eruption of energy. An instant vibe changer and a night definer. Unrelenting positivity and joy exudes from the shimmering chords, and that vocal is so smooth and comforting it almost verges on an RnB tip. I can’t believe I have only discovered this so recently as this is so up my street it hurts. Talking of streets, I listened to this walking down my street, and it gave me such a skip to my step that it made me feel like if I was lucky enough to listen to this so early in the morning, my day can’t be that bad. And you know what, it wasn’t. Whether that’s down to this song I don’t know but if it can warm my insides up on a cold February morning then imagine what it can do in a club. Unfortunately, this tune isn’t much of a well-kept secret, as it will set you back a cool £288 on Discogs. But you know what they say right, you can’t put a price on happiness!

Frankly, this song is long overdue to appear on this feature. I’ve been following this tune like a gazelle for absolute MONTHS. It is so difficult to convey to the uninterested how heartbreaking it is to know that there is music out there that you cannot find or possess. The fleeting experience of such beauty is quickly overshadowed by the knowledge that the moment was temporary and you may never hear that song or feel that emotion ever again. It is the eternal dilemma of the music lover. Clutching at the green light without ever grasping it. Sometimes though, music that you thought lost forever comes back into your life in a big way. This song is an example of that. Buried in a DJ Sotofett mix and almost forgotten about by me after listening over 6 months ago, this was recently released on Wania. Seeing it was released by LNS, who usually makes exquisite, emotional electro, made me think… could it possibly be? With bated breath I pressed play. The beat hit me instantly. Raw. Analogue. Gnarly. So far so good, but not sure if it sounds familiar… And then. Just like that. Those soaring synths rushed in, glistening like jewels and slipping away almost as quickly as they arrived. This is it. Those same emotions that I experienced all those months ago came flooding back. Once more, I basked in the warm embrace of those synths and thought of simpler times. Of my hopes and dreams. Of the possibilities that you create for yourself when you are in the comfort of music you love. There aren’t any complex emotions conveyed here, no intricate basslines or superior musicianship. In reality it’s nothing more than a really lovely slice of cosmic electro. But when it is so entwined into your own musical narrative, it is just so much more than that.

This almost sounds too good to be true. Can those pads really be that lush? Can that 808 be that bombastic? Can that acid line be that sharp? Somehow the answer to all of those is yes, and even more amazingly, all of these things were accomplished in 1993!! To think that such good acid electro was being made so long ago makes my fingers twitch at the prospect of rummaging through old record bins, searching for these diamonds. Who needs Furthur Electronix and Analogical Force when you have this? This sounds so contemporary and innovative that it almost makes these two labels sound stale. In terms of formula, there is absolutely nothing new here. Sticking an acid line with some nice pads and an electro beat is hardly reinventing the wheel. But when it is executed so exceptionally, it really is something to behold. This is alien music with soul. Proof that there is humanity within machines. This is music of the absolute highest order and I simply cannot recommend it enough.

This is one for the early morning sessions, as it is the perfect merger between deepness and misty euphoria. The early mornings during a club night are a magical time. In practical terms it is usually when the posers are long gone and only the real heads and enthusiasts remain. It is a time when energy levels are low but emotions run high. It is almost a time for reflection, both on the night you have had and the life you have ahead of you. A perfect early morning song taps into these emotions. It is not too excessive or hyperbolic. It is a careful balance between melancholy and optimism. It provides enough of a narrative in the song to insert your own storyline. By the end, it should feel like you’ve figured out a little more about yourself and your life. This song absolutely embodies all of this. Its synths are as hazy as the smoke that will drift around the dancefloors this song will illuminate. Its beat urging you on towards a crescendo that graduates from the controlled euphoria and explodes with the orgiastic wailing of the twinkling pads. Play this song at the right time, and you will turn the party from something enjoyable to something truly memorable.