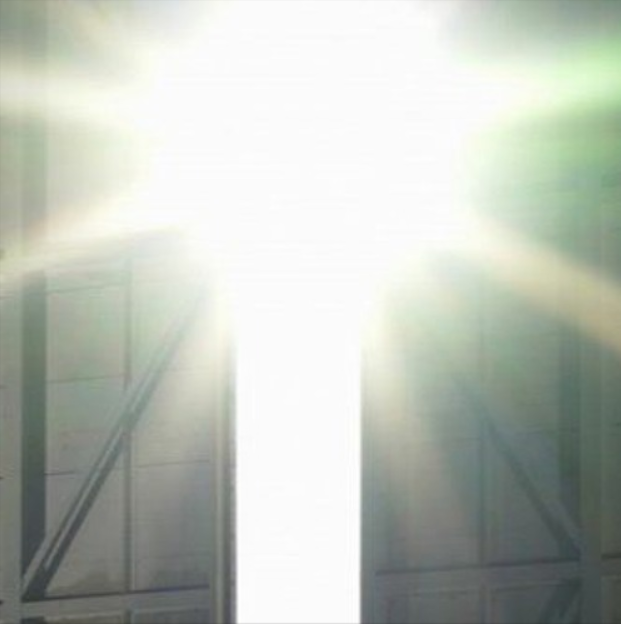 After months of hibernation, the man considered by many as the single greatest electronic music producer there has ever been, popped up again on the radar. His Soundcloud account – so humbly named as user18081971 – which had been dormant for so long, suddenly was populated by a string of new releases that he had posted in full. No explanation, no fanfare, just music. The context, unfortunately, was tremendously sad. It appears as if Richard D. James has recently lost his father, and it can only be assumed that this string of new songs is some part of his coping mechanism. I don’t think that this song was recorded in wake of his father’s death, as it had been previously aired at a show in Brooklyn (hence the title). But regardless, the posting of it at this time is cryptic, alongside the cover art which could mean anything from the pearly gates of heaven to the greeting of a new dawn. We can only assume that this song embodies some of the emotions that he is feeling at this incredibly vulnerable time. The man who is better than anyone at coaxing every last emotion out of his music has done another stellar job here, and this song is incredlby soulsearching and emotionally complex. What were the emotions triggered here? Serenity? Grief? Confusion? Acceptance? Has this song helped him find the path forwards or is it clouding his vision along the way? These are questions that perhaps will never be answered, but I think the ambiguity is intentional, and it further broadens the mystery of this enigmatic producer. But whatever he is feeling, the loss of a parent is unbearably difficult and my heart goes out to him because no matter what age you are, your Dad’s your Dad. Peace and love Aphex.

It’s one of the worst kept secrets in the scene at the moment, but the Ozzies are absolutely killing it right now. A really exciting community is brewing out there, rotating around the excellent Salt Mines label. Roza Terenzi, Lou Karsh/Reptant, Sleep D, Shedbug, Rudolf C. If you don’t know these names, you better. They are all excellent selectors and top notch producers. This song is off the newest EP from Salt Mines, made by labelhead Rudolf C. This song stood out, not because it does anything particularly innovative or revolutionary, but because when I listened to it, it felt like it perfectly captured the style being pioneered by this cohort of DJs. To give it a name? Let’s go with ‘aquatic tech house’. And yes, I have just made that up on the spot. My first impressions of this is that the production is superb. The pulsating bassline and driving beat instantly command your attention. The atmospherics have that signature Salt Mines wiggliness, and they make the song feel as loose and free-flowing as liquid. The combination of those two things give a really comfortable freedom to the song. This works really well. It’s not trying to do anything too ambitious, but instead focuses on getting the basics right, and the result is an effective ‘less is more’ product. Listen to any Roza Terenzi or Sleep D set as of late, and tell me that this song doesn’t encapsulate that pumping, heads-down 4×4 sound that they are playing at the moment? Add in those 303 acid lines halfway through and you’ve got the Lou Karsh homage locked down. This is an embodiment of everything good that is happening in the Australian music scene at the moment, and going by the quality of this (and their performances last year..), it feels like they should sack off the cricket and rugby and stick to music.

Anything with Skatebård involved is a guaranteed good time. The Norweigan DJ and producer, despite his Scandinavian heritage, is one of the world’s greatest purveyors of music for a sunny day. Whether it’s nu-disco, italo or electronic house, he has a neverending supply of weaponry that will make you serotonin bubble and your feet stomp harder and harder. He also has a fantastic ability to create songs that would fit perfectly into any one of his sets, showcasing how finely tuned his artistic vision is. This song is from way back in 2009, and could easily have been made by him yesterday. Does this show a lack of artistic progression or a dedication to a singular vision? I would go with the latter, especially because I know and love so much of his music that I am confident that this is someone with so much musical integrity and confidence that there is no way he has ever compromised on anything. The only thing that needs mentioning here is the vocal. Damn it’s catchy. Most of the time, if I hear a song and I can’t get it out of my head for the rest of the month, it finds its way onto this list. Well, guilty as charged on this one. Cuff me. I have belted that chorus out in the shower, sang it under my breath while cooking dinner and bopped along to it while spluttering for air during exercise. It is iconic. It is stinking with sex appeal. It’s a song designed to release inhibitions and to make a statement. It is brimming with NRG and has enough attitude to become a gay anthem. I absolutely love it, and you should too.

This one’s a bit nostalgic for me. I rediscovered this listening to an old mix that I had recorded way back in 2015. It was nice to hear the energies and flow I was feeling back then, and made me think that maybe I haven’t changed that much. I definitely was jamming to my own sauce that’s for sure. But the highlight of the mix was this song that came near the end. As soon as it came in it was like a light switch flicked on in my head, as I forgot how absolutely brilliant it was. I actually had to Shazam my own mix because I couldn’t remember the name of the song, which is either pretty embarrassing or… nope, just straight up embarrassing. But this still hits just as hard five years later. They say that sometimes the best place you can dig is your own record collection because there’s always bound to be songs you have long forgotten but remain absolutely killer. Truer words have never been spoken. Everything about this song is old school for me. The kickdrum and snares are as 90s as they come, but they still pack one hell of a punch. The melody is unique, incredibly moving in a way I can’t quite describe. I think they encapsulate the nostalgia I feel of listening to this, transported back five years to being a student at uni. It was a simpler time… But as soon as I start to get lost in my thoughts, the bassline in this brings me straight back. The bassline is the real MVP of this song, it works hard and damn it gets results. This song has really cheered me up and I thought it was good to showcase a song that has come back into my life recently, and my life is all the better for it.

So yeah, I’m really starting to miss dancefloors now. It’s getting a bit silly. Talk about not realising what you had until it’s gone… I have been secretly plotting my first big night out after this lockdown is over, like a lot of people are doing I imagine, and part of that is fantasising about what I would play if I were to be so fortunate as to be DJing at some big party. About as likely to happen as me injecting disinfectant into my eyeballs (Thanks for the recommendation Don) but a man can dream. But if I were playing some ridiculous party after lockdown, hypothetically speaking, this is the song that would be the centerpiece of my set. Yes, it’s trance alright, but before you click off the tab, just bare with me a sec. Before you do anything, skip to six minutes and let the song breathe. Take it all in. Think about how long you’ve been stuck at home and how much you need to go out. Don’t those chords and atmospherics just sum up the tension you’re feeling? Doesn’t the slow, patient build up get you excited for that inevitable drop which would just allow you to release all that frustration you’ve been bottling up for so long? As you feel the drop getting closer, don’t you get those tingles, as you would when you finally leave lockdown and step out into the long walk of freedom? You step into the nightclub, finally achieving the dream you set out in your head on those dark nights when all else felt lost. The DJ is killing it, the crowd as wild as you’ve ever seen. This song comes on. The build up creates an atmosphere you’ve never felt before. You can’t hold it in any longer. You need to let it all come bursting out as you finally release. The drop comes, and it is pure euphoria. Chaos and beauty collide in that instant and that moment imprints into the deepest parts of your psyche. Humanity seems solved. The sacrifices of lockdown were worth it, just to be in that moment when the stars aligned and the crowd celebrated life in one cloying moment of musical ecstasy. Yeah… that’s what I’m feeling when I listen to this. The question is, how does it make you feel?