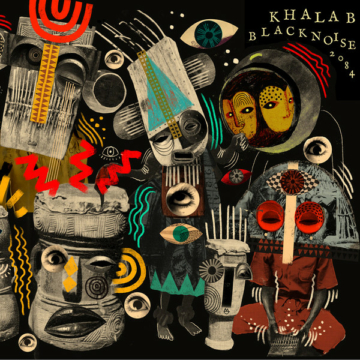 The bank holiday weekend has just gone. The sun is shining. What better to soundtrack this glorious time of year than with a song as killer as this. Bringing the summer vibes in a huuuge way, this ticks every box on the list of things to definitely play loudly and outside. It has a beautifully balanced build up, tense and progressive, yet unsinister and unthreatening. The chords are bright and rich, the beat sharp and piercing. Colour and precision are matched perfectly. The vocal is also really, dare I say it, African in its vibe. The backing vocals are distinctly tribal, and they layer really well on top of all the other parts in motion. Overall, a really satisfying package that will most certainly get rocked by me all summer loooong!

If someone gave you a hefty amount of money and said to you ‘go away and make me the wackiest, most abstract weirdo afro-tribal fusion song ever’, this is the sort of thing that you would probably come back with. Admittedly a request to raise some eyebrows, it is perhaps easier to believe that this was the song’s origination, rather than that something this bananas could have come from a blank slate. It is impossible to say what this is really, it’s kinda tribal, kinda afro, kinda all over the place yet kinda makes perfect sense. How can it possibly be so cohesive yet so chaotic?! Words fail me in trying to describe the noises I am hearing and all traditional nodes of narrative are thrown out the window trying to piece together the different threads of this song. Something so disruptive and iconoclastic should be discomforting, disorientating. But it isn’t. It is an absolute joy to listen to. The drop about 30 seconds in is certified dancefloor dynamite I am sure of it (I haven’t had the chance to play this out but God I want to). The vocals are excellent – I haven’t the foggiest what the lyrics mean but sounding cool has always been far more important than meaningful lyrics anyway. And that bassline. It’s so moody, so entrancing, so mysterious. That a bassline can be such a defining part of a track is a testament to how good it is, and for me it is easily the best part of this track. But it is up to you to find your favourite bit. Jump into this carnival of madness and see for yourself what the fuss is about.

Plant43 is one of the most consistently excellent electro producers around at the minute. Every release is reliably bursting to the seams with quality and, making his return to Central Processing Unit, he has truly raised the bar with his newest LP. This is my favourite track of the album, a tight contest between this and Neon Vista, but I chose this because I think its flow is smoother and its melody is darker and more interesting. A cynic could argue that Plant43 is a tad formulaic in his approach and that his songs are in danger of sounding too similar. My response would be that he has honed and crafted his own unique sound, and admittedly doesn’t stray too far away from that. But there are so many layers to this sound. Yes, he basically only makes trancey electro (save for an excellent ambient LP on Shipwrec last year), but they are just two words that fail to encompass the wide range of sounds, moods and emotions that he conveys in his tracks. Exhibit A is this track right here. The primary melody is completely fresh. It is erratic and urgent, a simple four bar loop yet endlessly intricate. It also reveals a central production technique that Plant43 does that I have noticed. What he does is build a whole track around a single loop of a melody. This is effective because there is one constant amongst the track’s development. It allows everything to heighten the central tenet of song and for all the different parts to complement each other. This is a perfect example. As you listen to this song the four bar melody doesn’t change throughout. But as the song builds around you, you begin to become entranced by this melody, getting more and more lost in the loop and falling deeper and deeper into the depths of the song. This is not hands in the air dance music, this is one for the deepest darkest depths of the rave, when the troops need something to put their heads down and march to. Absolute gear.

This is weird because it sounds like a 140 track, with the wubs and the drum patterns. But it is actually about 113bpm, which means that when you pitch it up it is really mixable with your traditional 4×4 vibes. I feel so blessed to have found this song. I so nearly missed it. There is another track on this EP called Strafen which has been getting some attention. It’s a really cool, tribally burner that is perfect for a warm up set and I heard it in some Ben UFO set (of course it was Ben who got there before me and basically everyone else). So I downloaded that track, but didn’t think to listen to the rest of the EP and forgot all about it. A few days however I somehow stumbled back onto this EP on Discogs, and having realised I hadn’t checked out the other tracks on the release, thought I would give it a go as there was bound to be another wonky turner that I could use. Well, I didn’t find what I was looking for… I found something better. I think the word that I come to when trying to summarise this song is: power. In many ways it is a very beautiful song. The angelic vocals are haunting, yet so enchanting. But what grabs me more is the very raw energy that is being thrown around the song. The basslines are brutal in their four bar stabs, subtly providing the firepower for the angelic vocals and lovely synths to work their magic on top. The result is magnificent. It has that big-room feel to it, that ability to encapsulate a huge room of people, and to convey so much hyperbolic euphoria with such majesty. I won’t lie to you, I played this song when I warmed up for Cosmin TRG, Pinch b2b Beneath and Solid Blake last month. I played it at about midnight, and it was probably the wrong time to play it… but I just couldn’t resist. I just HAD to know what it sounded like on a system, and whether it would provoke a positive reaction from the crowd. Well, it sounded fucking killer and the crowd loved it, so maybe it wasn’t a mistake after all.

I’m not even sure if this song is supposed to make me feel happy or sad? Can the answer be both?! This is a magnificent piece of art. What is a rather pleasant – if slightly clicky – slice of IDM is raised to unparalleled new heights by the vocal in this. IDM and vocals are usually a combination that doesn’t end particularly well, but Bola has broken the curse here. I think the vocals here are absolutely stupendous. They are so alluring, yet so haunting. There is something a bit unsettling there, something I can’t quite put my finger on, yet is definitely there. I did some research about this song when I encountered this feeling, and I am a bit weirded out by the answer I found. The reason I felt this was because the vocal wasn’t done by a person. It was done by a vocaloid. There is a far more technical answer which I barely understand and which definitely is not that interesting, but basically the crux of this is that the vocal was done by a machine!! This adds so much depth into the song, as the vocal sound possesses the limits of a machine, rather than a human. The merger between human and machine is what makes most electronic music so good, when the harsh mechanics of machines meets the warm atmospherics of human emotions. This song takes this relationship to the next level somehow, by giving the human part to the machine. Whether you think I have the next best idea for a science fiction novel, or whether you think I am chatting a tremendous amount of shit, it doesn’t really matter. What does matter is that you listen to this amazing song and think deeply about how that vocal makes you feel.