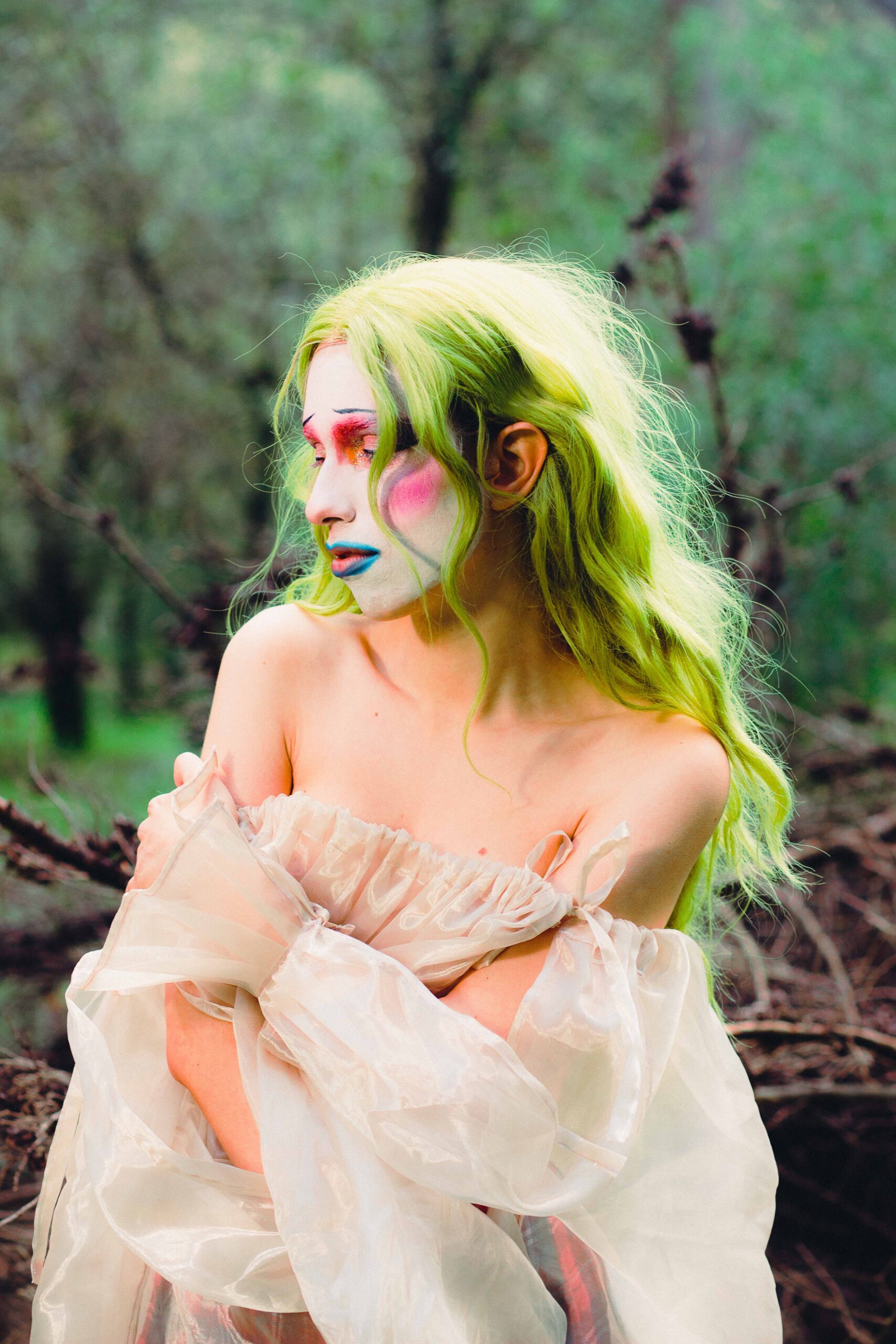 Listening to Odete’s music is like being transported to another universe, one filled with myths and legends, spells and magic, and otherworldly beings. It’s haunting, beautiful and ethereal. Filled with so much emotion and deeply researched ideas that often question our existence. Each record is its own concept and story, whether that’s contributing a single to a compilation or a fully formed release. From a water-bending heroine who’s gift ultimately leads to her demise, to a girl who drowned herself and came back as a banshee – as told on one of Odete’s recent singles ‘Epilogue For A Banshee Cry’, released via Houndstooth’s Alterity compilation. This storytelling approach to Odete’s work is what captured my attention the most and how it translates to the physical world through drawings and her personal style.

Part of the Circa A.D. collective, Odete has come through the DIY scene in Lisbon, playing alongside artists such as Mykki Blanco, Badsista, and DJ Haram. Releasing her first record in 2018, Odete has since worked with labels and platforms such as New Scenery, Troublemaker Records, Rotten Death, Future Ethics, Sermon 3 Recordings and Radio Quântica. As a visual artist and performer, Odete is one of the most exciting artists coming out of Portugal, with her work reaching an international audience through these global compilations and previous tour dates in France, UK, Germany and Belgium. To celebrate the release of the Alterity compilation, we speak to Odete about her relationship with Houndstooth, the story behind the single, the importance of compilations and community and her connection to fantasy.

You’ve recently contributed to Houndstooth’s Alterity compilation, how did that come about? What’s your relationship with the label?

It came as a surprise. I remember it came through an e-mail of a recent project called Future Ethics tho which I contributed. They kind if served as a contact bridge. But before that my connection to Houndstooth was just as a listener.

Could you tell us a little bit about the title of the track ‘Epilogue For A Banshee Cry’? What’s the story here?

That track was part of my Water Bender EP, better call it a phase than an EP. I was creating these music pieces that would tell the story of a girl that drowned herself just to come back to the world as a banshee, screaming out her heartbreak and announcing to some people the proximity of their deaths. In the end, the track didn’t make it to the EP because I felt it would be more interesting to spread this “phase” or project through compilations and other music I did at the time. If I had to give a narrative to the track it would be pretty much the moment before she screams as a banshee for the first time.

How do you usually start your production process? Is there an idea or concept in mind already before you begin?

There usually is. What I do is try to understand what I want with the music: if I want to say something, to create a world, to allow meditation or whatever is in my mind at the time. After understanding what I want I go and record and search for samples/foley that can figuratively speak of that thing, be it a world or an idea. I collect and crop the samples so their figurativity becomes abstraction at the point of exhaustion. You hear the tracks, you recognise the sounds but you can’t grasp them individually because they become part of the ecosystem of the song – it becomes habitable in a way.

You’ve previously released/curated compilations with the Circa A.D. collective – what do compilations allow you to do outside of a traditional release?

Compilations allow me to explore themes, feelings, ideas in a more immediate way. Sometimes I’m obsessing over something, I do the track for the compilation and that obsession becomes another thing: becomes understanding – and then I move on (usually) to yet another mutation of that and others obsessions.

There’s an ethereal, fantasy element to your work, both within productions, mixes, and online aesthetic, what inspires this? What’s your connection to these themes?

My connection to fantasy begins as far as my childhood. Not only it served to re-imagine this idea of reality we live in, but also to re-configure my body and its interactions with everything outside it. I think fantasy, like sci-fi, has this potentiality of creating worlds that allows us to imagine other possibilities to our own world. The difference of fantasy, I think, is that there is a weird nostalgia about the past, an aesthetically pumped nostalgia. Goblins, elves, monsters all seem to come from a distorted medieval obsession. And even though that seems toxic, that’s what attracts me more to fantasy than to sci-fi, for example. It is this almost historical re-writing aspect that haunts me – and tempts me. It’s almost as if the worlds of fantasy came from the past and so we are tempted to connect to a history of something that was – but never actually was. It’s pretty much historical cosplay. And this idea of playing around with the “feeling” of history can bring a lot of powerful stuff. I usually say that my trans body is not from the future, but from the past – and I think it’s because of my connection to fantasy and its potentiality to transform through a collective historical imaginary.

How does your definition of fantasy relate to your relationship with music?

I think it’s what I was trying to explain previously about taking samples that are recognizable that are figurative in the sense that they are like water sounds, swords, knives, screams, keys, door knobs, etc. Fantasy works through recognition of something that does not belong to this world through elements of this world but at another time – usually a past time. It’s this engagement with recognisability, with cosplay (as I was saying previously) that crosses my music practice. This idea that you take those elements and transform them into something that is not them anymore, that is not this world that “was”.

Who are some of your favourite fantasy characters and why?

This is a hard question – so many! And I consider fantasy to go beyond literature or games or movies – like for example, the works of Téa Strazicic (aka Flufflord) are pretty much engaged with this feeling of fantasy and their characters are the ones that I obsess continuously. Also, some musicians have personas that I think engage with this too- like BOD or CoreSelf.

Themes of spell work and magic also come up a lot within your work, what’s your connection with those? How do these themes inform your artistry as well as your personal life?

Magic was always important to me because it was a way to connect to my body. I really don’t want to go further in this answer regarding this because I feel it is a very private subject. I think my music speaks for itself and answers what might be my connection to magic and spell work. Of course, there’s a more philosophical aspect of this that is the history of magic seemed to include people like me more often than any other.

“You hear the tracks, you recognise the sounds but you can’t grasp them individually because they become part of the ecosystem of the song – it becomes habitable in a way.”

You mentioned in a previous interview that you felt when you were being booked for bigger shows/platforms you felt like people were more disconnected from the music and the work you were performing. How do you feel people’s listening habits have changed since clubs are shut? How have you been engaging with music outside of that environment?

I can’t give any generalised answer to this, because I really don’t how listening habits might have changed for everyone. Regarding myself, I really feel I started to diverge from club music. With no sound system and no space to dance I really felt weird listening to some very intense and loud club tracks. Sadly, I don’t really have any space to dance inside my room, and as my house is shared, I can’t blast club music to dance in the corridor or wtv. We can’t meet other people and dance freely also due to the pandemic. Our options are listening to music outside but that still leaves a wall of uncomfort between us and the public space…so I started to listen to music that was more contemplative and that could open world through my ears in a more meditative way – Eartheater, for example.

With the uncertainty of what will exist at the end of this, do you feel like you’ll want to go back to playing for these platforms or do you think you’ll want to focus your efforts on the smaller, DIY events?

I think smaller events feel more calm and sweet than ever before. I just wish these events had the budgets – because if money is just spread through big platforms like always…then how are we suppose to strive in a pandemic? I think “big” artists should reconsider their audiences and the contexts of their art so the “grandeur” of the artistic event could transform into something way better.

Community is a word that comes up a lot when reading previous interviews and it means something different to each individual. What does community mean to you?

It means people that saved my life. It means friends – it means possibilities out of solitude. It means growth.

All my friends. They’re the most inspiring people, artists, planets: Herlander, Drvgzila, Ness, Swan Palace, Stasya, Alice dos Reis, PHOEBE, Violet, and so much more I can’t even. I love them.

How are you staying creative at the moment?

By researching, I guess. By breathing in and out and reading and trying to understand some stuff. Don’t exactly if that’s creative but at least gives me some life force.

‘Alterity’ by Various Artists is out now via Houndstooth – buy here.