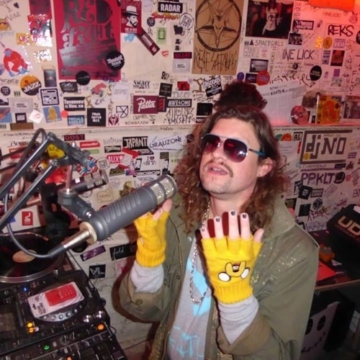 Seeing as the rest of Planet Earth aren’t as blindly obsessed with the doof than we here at 909 are, we thought we would do our bit for society by scanning the web for the best mixes of each month. Devoid of any genre constraints, this is purely an exercise in showcasing whatever the 909 crew have been feeling from the various mixes released this month.

This is one of a multitude of wicked Hessle podcasts on Rinse FM. However, this one especially resonated with me because I was super proud to see man like Lukas Wigflex stepping up to the plate in the big leagues and tag teaming with Ben UFO.

I’m really glad to see Lukas flexing on a national scope and finally getting the attention he deserves. I went to his Wigflex parties all through my time at Nottingham and can assure you that he can throw down with the best of them.

I also feel it necessary to note that the Wigflex parties are also some of the best in the country, and seeing acts like the Hessle Trio, Actress and Paranoid London completely corrupted yung Rory’s mind with that techno racket. Actually about 99% sure that the Hessle Audio Wigflex Showcase was the best rave I’ve ever been to…

This partnership upon first glance may seem surprising, as Lukas’ boisterous, yet hugely affable demeanour clearly juxtaposes Ben’s more measured and introverted visage. Yet it is clear that there is a great personal and professional relationship there, with Ben returning time and time again to play at his Wigflex parties – the two even  played b2b all night in a 100 capacity disused ibroprofen factory last year – and I hope that Ben can help Lukas’ career go supersonic, cause the boi deserves it.

This podcast properly delivers the business and evidences the pair’s complementary styles, with standout tunes from Talaboman, Bolis Pudul and 5ive & Samo DJ.

I’ll admit, I hadn’t heard of Vladimir before this mix, but this bizarrely enchanting mix swiftly converted me to the enlightened. As soon as I found out he was a resident at Salon Des Amateurs I knew that this bloke meant business, as the club is notorious for its laizzez-faire-on-steroids attitude to its music policy; and has paved the way to success for its other residents; including Lena Willikens and Jan Schulte aka. Wolf Müller.

This mix is a masterclass in restraint and mystery, as Vladimir expertly and intricately builds the tension and energy for over an hour, until it bubbles over with the dazzling Desire & Efficiency anthem – of which you can hear me gush about here. As well as this, the song selection is excellent, and demonstrates the impressive range and complexity of his record bag.

I’m not just jealous cause he has a beard as fucking awesome as that ^, but also because this dude is a supremely talented selector who has no doubt caught the attention of a lot of heads with this mix. You should’ve seen my face when I found out he was on the roster for Dekmantel Selectors this year. I’m praying he’s on the same night as I-F… getting giddy just thinking about it.

Resident Advisor treat us well don’t they. This month they uploaded three (!!) mixes from their fabric In Residence party at Studio Spaces last year, featuring sets from DJ Stingray, James Ruskin b2b Blawan and Head High. I listened to all three mixes, and really deliberated as to which one to include here. My final decision was this one from Head High. I nearly went for Stingray but I realised that I was just gassed that he played Drexciya’s Lost Vessel and Head High’s was in fact far more innovative and enjoyable.

This set is epic. I heard rumblings about how sick this set was on Facebook, as it garnered unusual recognition considering Stingray, Jeff Mills and Craig Richards x Ben UFO were also playing, and one would assume people would wax lyrical about these usual suspects. Listening to this however, it’s easily understandable why people were heaping praise on Head High.

This is pure rave music, brimming with euphoria (Future Sound of London’s Papua New Guinea the obvious choice to exemplify this) and bringing the 90’s hardcore back into the spotlight. It’s actually quite rare in my opinion to see this type of music around these days, and I hope that this serves as a signal for its comeback as this stuff is far better suited to play at the various big room events rather than that tech house pish.

I found some absolute gems listening to this, most particularly Run Tings – Back Again and Bass Selective – Blow Out Part II. These are huge tips for those reading this and ridin’ the 909 groove. I actually was a bit disappointed when I saw Head High in Notts last year but this mix has made me instantly forgive him. I’m sure he was being kept awake at night by my discerning opinion and hope he can sleep easy now… anyway, bigups lad.

Dr Proper’s Soul Show always provides some proper medicine to placate the mind, and this month was no different. What better than some blues to take the edge of those Wednesday blues? You can always count on everyone’s favourite pirate to cook up some red-hot selections that will instantly make your day easier. I can remember in his January show he played Saturday Love by Cherelle and it turned my office into Paradise Garage for 5 minutes… until my boss walked in and awkwardly caught me fistpumping the air.

A great range of genres on display here; reggae, blues, house, disco, soul, funk. The Dr can do it all. The show is typically loose and full of some pretty cool cuts from the days of past, and it has the added bonus of the mad doctor babbling on in between songs; his effortless charm and silkily sultry voice slowly but surely stealin’ yo girl.

Highlights of this mix include Tullio De Piscopo’s triumphant groover Stop Bajon, the Kon Edit of Wood Brass & Steel Band’s Long Live Music and the super-octane thriller Changes by Chain Reaction. All of these songs exemplify the Dr’s intoxicatingly cool disposition and they cumulatively help formulate a super-smooth and uplifting mix.

Cheating a tiny bit here because this was released in February, but I won’t tell if you don’t. Uncompromising, merciless, pioneering. There’s literally no one that can spin records like the Hauff at the moment, and her female presence in the music industry has never seemed more needed, due to the criminal under-representation of females on lineups around the world. If any dickhead ever says that girls can’t mix, show them this mix while simultaneously telling that person to fuck right off, cause this mix is an absolute masterclass in dystopian pandemonium.

Every tune is as badass as they come and are ferociously tangled together by Hauff’s faultless mixing, which is notable considering she only spins wax. I can almost smell the roll-ups she was undoubtedly chaining while recording this, and can envisage that punkrocker grimace on her face. Highlights for me include Transparent Sound’s enormous No Call from New York (Original Acid Mix), The Martians’ Eagle Dance and The Crash by The Exaltics. The first two I’ve now bought on vinyl cause they’re that damn good.

As I’ve said before, electro is coming back in a biiiiiiiig way. Helena is spearheading this charge and is leaving all the other electro titans (DJ Stingray, Intergalactic Gary, I-F, The Egyptian Lover etc etc.) in the dust. She also provides some welcome relief in the music community. Although punk happened nearly 40 years ago, its presence is still ever needed in our society. Who wants to listen to music that your mum and your nan likes? Likewise, who wants a DJ that whores him/herself out on social media to court popularity? Hauff is championing the punk spirit, saying fuck you to everyone and everything while simultaneously banging out the most esoteric and titanic tunes  you can find. Johnny Rotten would be proud (if he had any free time from selling butter on the telly).