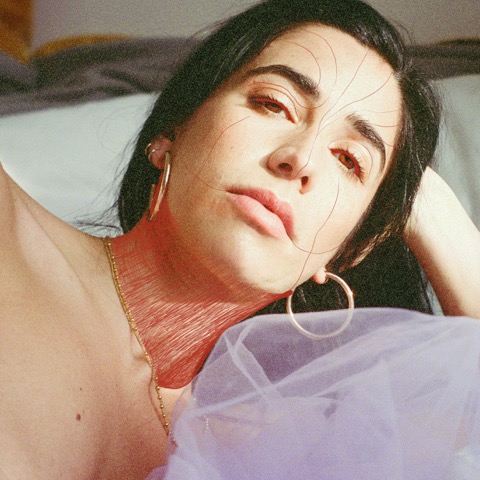 Having worked with the likes of Kano, Lil Silva and Joe Goddard, most notably on the acclaimed single ‘Gabriel’, London-based songstress Valentina has made a welcomed return with her first solo record since 2013, ‘You Know Where My Happiness Went’,  out on the 1st April. With the titled track delivered last month, today marks the release of second single ‘Violet Sky’.

The five-track release is deeply personal following an introspective yea, reflecting on relationships and love lost. Talking about the inspiration, Valentina says, “these songs were written and recorded alone, predominately in the middle of the night, over the course of a messy on/off relationship that followed the break up from a long-term partner.” In particular her newest single ‘Violet Sky’ was written the night “I’d been dumped whilst my ex slept in my bed in the next room. He said the line that became the chorus and I couldn’t get it out of my head. How can you not want to lose someone and also be breaking up with them? It seemed like the cruelest thing you could say”, she explains.

With ‘Violet Sky’ out now, the English-Italian artist talks through some of the key tracks that have shaped her as an artist from Kindness (was previously part of their band), to Yaeji, Arthur Russell, Obongjayar and more.

I love this whole album and used to listen to it obsessively. It still sounds so fresh now, and every time I listen to it there’s something I didn’t hear before. It’s such a satisfying, intricately woven gem.

My brother introduced me to this song, and it’s one of my favourite new discoveries of the past few years. The artist is a Malian guitarist and everything is recorded in his living room – his wife sings the vocals on this. I think you can hear the intimacy between them. It’s as if you’re listening in on someone’s private conversation.

Arthur Russell’s music has had such a massive impact on me, it manages to consume so many spaces at once. There are equal measures of joy and melancholy in his music and his voice. It seems as if he never did anything by chance or by mistake and yet there is so much freedom in his music. Also, stylistically he was a genius at touching on so many different sounds and genres seamlessly and effortlessly.

I fell in love with Yaeji at first listen. It’s a no brainer really – just how house music should feel. It makes you want to dance, it’s uplifting and fun but it has this underbelly of something intriguing and totally unique to her.

I will never be over this track! That beat!!

Feel like this song has followed me around for years. And I am fine with that. It is a timeless classic. An honest, beautifully written song sung by one of my favourite singers.

Kindness – For the Young

Adam has an amazing way of encapsulating a complex feeling into one perfectly concise line; which they do many times in this song and which is what the best pop music should do, in my opinion.

There’s a sweet spot in this track where the production meets THAT voice – that he kind of holds back and never really lets you have, that just gets to me!

Like being wrapped in a twinkly blanket of nostalgia – recorded in 1927 on a homemade instrument he called a Manzarene.

‘Violet Sky’ by Valentina is out now, taken from forthcoming EP ‘You Know Where My Happiness Went’ – buy here.