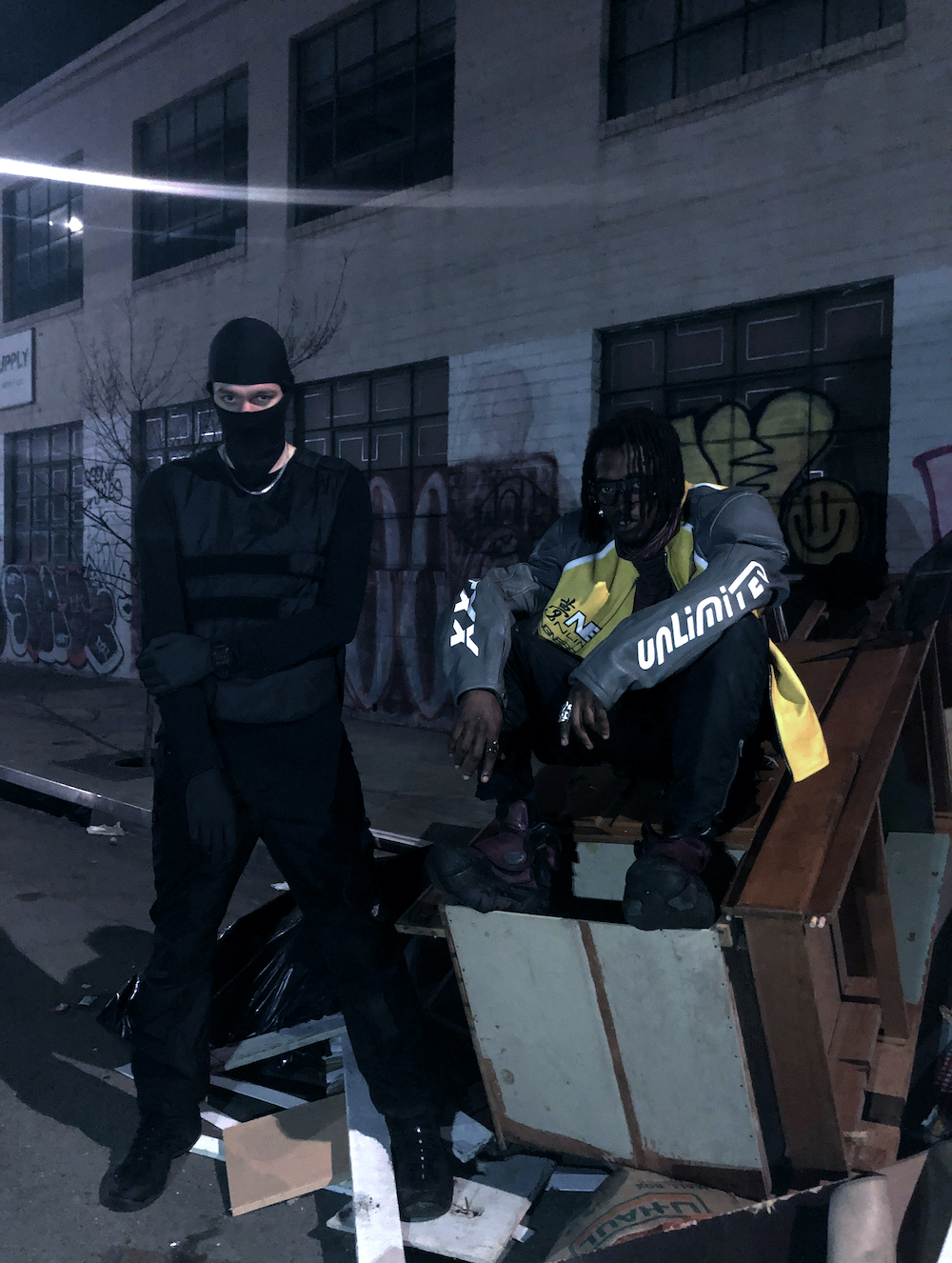 Mexico City/Montreal’s Infinite Machine has signed DÆMON and Endgame for a brilliant collaborative EP, DXE. Out tomorrow, it’s the tale of two visionaries coming together, creating a powerful force which explores influences and sonic palettes from their opposing environments.

London-based producer Endgame made his name through with the Bala Club collective, now affiliated with Hyperdub and launched the record label and radio show Precious Metals. Whilst Oakland’s DÆMON released his debut album, ÆOS, on Chino Amobi’s Intelligent Models last year and has contributed singles to Sermon 3 Recordings, Illegal Data, and SIRENS compilations and collaborated with Fitnesss and Embalming Lately.

For DXE, the two artists go dark, timed perfectly for the ‘spooky season’. Over the course of five tracks, they cover all bases from dancehall-inspired vocal performances to punk, dembow, and techno. It’s an impressive, forward-thinking release with both Endgame and DÆMON’s sounds perfectly complimenting each other, taking us to the upside down with demonical beats.

In this edition of our Influences feature, DÆMON and Endgame talk through some of the formative inspirations which have helped shape who they are today both as a person and artist.

A masterfully crafted hybrid film; serving simultaneously as a documentary, and introspective autobiography, and a musical & theatrical performance. These elements come together to paint a thorough picture of the immense complexity, nuance, & beauty of black identity.

A classic sci-fi time travelers tale, intertwined with the history of black resilience and struggle in pre and post civil war eras. Genius literature by one of my favourite writers. The vivid imagery she is able to produce will remain burned in your mind.

I believe this is one of the best post-apocalyptic novels of all-time. It’s grim and honest portrayal of humanity, the depleted toxic wasteland, and the nature of survival have stuck with me over the years.

@mitra.varuna and I wrote a piece of fiction commissioned and designed by Country Music’s own ✨@annassag & @iinatti. The text is called ‘Host’ and revolves around Lee, Alex and Schwar. We made some drawings too. DM me if u want a PDF 🦎

This text creates a beautiful universe in which this fragmented short story is housed. The perspectives of several characters serve as glimpses which compound into a rough image of amorphous reality, with subtle suggestions of telepathy or collective consciousness.

This text dramatically changed my perspective on black identity and my relationship with trauma. I highly recommend this text to anyone who is interested in understanding the transgenerational effects of chattel slavery from a psychological & genetic perspective.

This song is so beautiful and brutal, changed my life when I heard it. It’s so unrelenting and intense, but also feels human and relatable somehow. Listening to metal a lot growing up really influenced the way I approach music, and the kinds of sounds I’m attracted to. Things like intense precision and the contrast between high pitched leads and punishing bass.

I spent a lot of my adolescence in Jamaica as my Dad used to live there, and dancehall had a big impact on me growing up. Tommy Lee is an energy, his unique flow, with the minor key riddims and the horror aesthetics are an important reference point. You can hear this in tracks on DXE like Queue and Eye teeth. I will never forget seeing him play Sum-fest and he came on stage in a straight jacket, his demonic alter ego is something I’ve always identified with.

This film had a huge impact on me, it’s the combination of a lot of my favourite films, like Hell Raiser, Alien and 2001. The score by Orbital is this amazing doom charged dance music with mad sound design, that reflects the decent into ‘a dimension of pure chaos’. It was a major influence of beats on ‘let me breath’ and ‘caged’.

Spawn will always be important to me, in terms of the themes, but also the aesthetics. He’s the ultimate anti-hero, it’s hopelessly tragic but hopeful.

Grime like this has always had an influence on me since I was a kid, I love that it often occupies this space between rowdiness and self reflection. It’s the mood of going home alone on the night bus at 5am when your phone has run out of battery, and you’re left with just your thoughts.

Such an anthem of that era, it had a big impact on the London club scene at the time and is still relevant. The beat by Mainframe is a masterpiece, and I feel like it influenced a lot of club music, even though it was a drill track. It’s the blueprint for any club track I make.

‘DXE’ by DÆMON & Endgame will be released on the 30th October via Infinite Machine – pre-order here.