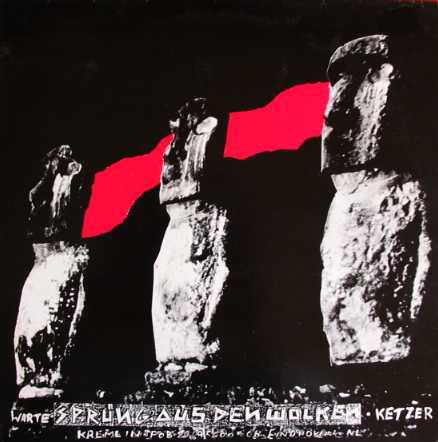 It’s back! After more than two years of inactivity, we have decided to rekindle this feature and venture back into the weirdest, wackiest and wankiest album covers we can find. Untitled 909 anti-connoisseur Rory Tanner takes up the mantle once again to offer questionable analysis and unquestionably bad chat. Not much has changed in two years it seems, as the last time I wrote about my favourite album covers I referenced the previous Outro Tempo release and the artwork which was also done by Alice Quaresma. I promise I’m not being lazy, I just think that she is a literal genius and one of my absolute favourite artists, period. Order and chaos are expertly combined here, with block colours and regular shapes merging seamlessly with abstract images and splurged paint to create an achingly beautiful final product. I like the subtle contrasts in colour used as well, the lifeless grey juxtaposed with the warm pinks and vivid greens. It is a suitable representation of the album itself, a compilation of music from the cities of Brazil. The colours perfectly symbolise this, grey representing the urban landscapes and pink the humanity that brings these cities to life. This is artwork with enough intelligence and meaning to make it onto any wall of any art gallery in the world. Simply stunning. Who knew that blobs could look so nice? Contrary to belief, this is not what my girlfriend said to me before I left the house this morning, but is in reference to this quite wonderful album cover from The Bermuda Triangle. I really like the hazy colour tones. It’s weird because when trying to describe them they sound insanely boring (my best suggestions were the colour of nice curtains and some used parchment) but when looking at them they seem really appealing. The blurred palette gives the impression that this is almost a watercolour image, but of course it isn’t. And then we have the blobs. Yes, they are definitely blobs. There is no other word in the English language that can so adequately describe these things. They work excellently here, being both subtle and eye-grabbing at the same time, and contribute to a satisfying album cover that is abstract without being too offensive. You can take one look at this album cover and conclude with some certainty that this will be some ridiculously experimental industrial record. I mean c’monnnn. Easter island figures with a red line connecting them with a black background?? Those three things have never been said in a sentence without being accompanied by some drone soundscapes that edgy people pretend to like to look cool. I mean, you listen to this album and it sounds like putting your ear to a hotel door in Bratislava during a particularly rogue stag do (https://www.youtube.com/watch?time_continue=210&v=pnQsGXzTB8Y for reference). But yeah, I think this album cover is wicked. Its symmetry is quite soothing, which is a nice contrast to the brutal colours and the unidentifiable German words being bellowed at me at the bottom. That font is class as well, it looks like the words have been carved onto a wall of a Russian prison.

Yikes, where do I even begin here?! Do we focus on the upside down moonface or the swarms of limbs all over the gaff or the weird vortexes dotted everywhere or the endless number of heads lurking about? It’s all a bit much I have to say, but I think that’s the point. It’s supposed to be overwhelming and otherworldly. There isn’t supposed to be any context or meaning, it’s just fuckery for the sake of fuckery. I like it though. It certainly caught my eye to say the least, and I think it is unpretentious because it would be fairly hard to take this seriously as a work of art. Sorta like Dali meets Rick and Morty or something I don’t know. But, although I keep mentioning how unrealistic this is, this is probably an accurate representation of what it looks like in Berghain at like 11am tbh. It probably isn’t, but I like to think that this album cover is a snapshot of the Berlin Wall. I mean, it is a Berlin techno record, and it kinda looks like the sorta stuff that is on the wall, so the claim isn’t that audacious. It certainly wants you to think it is a real life still, as there is graffiti and ripped off posters visible. I guess it would make more sense if it were real, as what would otherwise be senseless and disorientating is plausible and pleasing, an honest snapshot of everyday, accidental art. It captures the raw, scrubby detail of urban decay very well, and it brings a rather beautiful and sensitive techno record into life. I guess that this is what an album cover is supposed to be at the end of the day, to reflect the contents inside of it. It shouldn’t outshine the music within, but should complement it. This does exactly that, so ultimately, whether this is or isn’t a real life image, it doesn’t really matter in the end, does it?